There’s nowhere quite like the Cape Cod Canal. The ripping currents formed by the exchange of water between Cape Cod Bay and Buzzards Bay create a fishing experience unlike anywhere else along the East Coast. Fishermen must be prepared to throw large plugs and heavy jigs to tempt the large stripers riding these currents in pursuit of the huge schools of baitfish that use the Canal as a shortcut. Easy access and great fishing has made the Canal one of the most popular surfcasting destinations on the East Coast, rivaling even Montauk Point. To the newcomer, this man-made waterway can be an intimidating place with its big fish, big tides and big crowds, but we’ve compiled a few articles from our archives to help you along your way. Check back often as we’ll be posting more articles as the season moves on, and before each trip, be sure to consult the Army Corps of Engineers Cape Cod Canal tide chart that we’ve included a link to on this page.

Before your Canal cotillion, learn how to comport yourself in the manner Mr. August Belmont Jr. envisioned when he began digging the Ditch more than 100 years ago. What follows will be your guide to proper decorum along the 7-mile waterway that connects Buzzards and Cape Cod bays.

Stripers use current breaks as resting and feeding points, and there are plenty of them scattered along the Canal shoreline. Any small outcropping will create a current seam. Stripers will sit on the slow-moving side of the seam, waiting for baitfish to move past them. Seams usually reveal themselves at the lower stages of the tide. Fish them with swimming plugs, like a darter or bottle plug, allowing your lure to sweep over the seam and into the slower water where the bass will be lying in wait.

There are three primary techniques used by fishermen on Cape Cod Canal stripers:

Jigging involves probing the bottom of the canal with bucktails or leadheads and soft-plastic baits. Some fishermen “jig” with Cotton Cordell Pencil Poppers loaded with birdshot.

• Learn how to make a loaded Cotton Cordell Pencil Popper

Reaching bottom in the heavy currents requires the use of jigs as heavy as 5 ounces. Fishermen target areas with drop-offs or structure where stripers lie in ambush.

Plugging targets the upper part of the water column, seeking stripers that are actively chasing baitfish near the surface. This is very popular at sunrise, when stripers and baitfish are often visible on the surface.

Bait Fishing is also popular in the Canal. Live eels are commonly fished after dark during slower stages of the tide. Chunking with bunker or mackerel is not as prevalent on the Canal as it once was, but it is no less effective. Fishermen either pin their bait to the bottom with a sinker during the slower stages of the tide, or they allow it to drift with the current when the tide is running.

• Remember: Circle Hooks Must Be Used When Fishing for Striped Bass With Natural Baits

Given the fast currents and large lures, Canal tackle needs to be stout. Spinning reels are most frequently used by Canal anglers and are the best choice for plugging. Spinning reels are also effective for jigging, but a conventional reel will allow you to keep better contact with the bottom.

A jigging rod needs to be heavy enough to cast 6-ounce jigs and powerful enough to lift a big bass off the bottom in heavy current. While some fishermen jig the Canal with 11-foot rods, most prefer a 10-foot stick. Reels with a fast retrieve ratio are helpful for retrieving the jigs in a hurry and keeping them above the tackle-eating rocks of the Big Ditch. Jigging the Canal is tough on tackle, so many anglers make a big investment in their jigging setup to ensure it holds up to several seasons of abuse.

Long casts can be essential to successful plugging in the Cape Cod Canal, so fishermen look for setups that will cast 2 to 5 ounces a long distance and have enough backbone to pull the bass back against heavy current. An 11-foot rod and a spinning reel with a long-cast spool is the norm among Canal anglers. 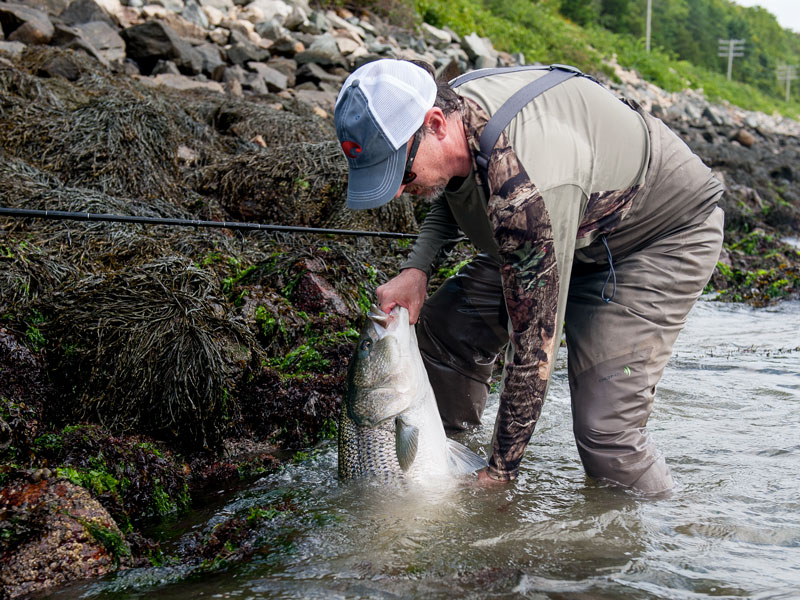 The most popular time to fish in the Canal is during the “breaking tides,” so named for their tendency to produce fish feeding at the surface. These conditions occur when the current change from west to east happens close to daybreak. Breaking tides last for three to four days and fall close to the full and new moon phases. The extreme tides brought on by these moon phases trap baitfish in the Canal, allowing stripers to make an easy meal of them.