Redfish are a common bycatch for fishermen targeting cod and haddock north of Cape Cod. They like deep water, 200 feet or more, and hard, rocky bottom. They are the only member of the rockfish family (Sebastes) in the Atlantic Ocean, but they have more than 50 relatives in the Pacific. Many of those species, like the shortraker or yelloweye, regularly exceed 20 pounds in weight and are highly sought-after sport fish. The Acadian redfish, however, rarely exceeds 1 pound.

But, what the redfish lacks in size, it makes up for with its abundance and the flavor of its delicate white fillets. With the promise of a day on the ocean and the potential for a freezer restock, I easily justified my redfish road trip.

When I arrived at Eastman’s Docks in Seabrook, I saw I was far from the only cabin-fever-afflicted fisherman in search of a remedy. I’d later learn that several anglers had come from even farther away than I had.

The destination, per Captain Phil Eastman, was Jeffries Ledge, where he’d anchor over the rocky bottom favored by redfish. Phil’s been running headboats for 40 years and has been making redfish-specific trips for 20. He considers reds to be the best-eating fish in the region—high praise for waters home to such seafood favorites as haddock, cod, and winter flounder.

As Phil pulled back on the Lady Merrilee’s diesels, the mates distributed buckets filled with squid cut into calamari-style rings. Like many deepwater species, redfish are opportunistic, and will happily attack any morsel they come across. Squid stay on the hook well through repeated short strikes and put out plenty of scent, making them a perfect choice for deepwater bottom fishing.

Catching the redfish requires a high-low rig outfitted with 5/0 octopus-style hooks. I noticed many of the anglers had tied simple rigs without accouterments. This made it easier to untangle the inevitable crossed-lines that happen on headboats—and the less time spent in tangles means more time on the bottom and more redfish in the cooler.

I’d initially added beads above my hooks for splashes of color on my high-low rig but removed them on the recommendation of Lady Merrilee mate, Nicole Gagnon. She said they weren’t attracting any more bites and would only complicate the tangles. No fishermen have as much experience with tangles as the mates on party boats, so when Gagnon advised how to avoid, or at least minimize them, I listened.

The first step to reducing tangles is to use the same amount of weight as the anglers around you. This keeps the rigs moving at approximately the same speed in the current. A rig with significantly more or less weight will drift out of sync with the others, leading to crossed lines and tangles.

Should I end up in a tangle, Gagnon stressed the importance of keeping the line tight by reeling with the other anglers in the tangle. Fishermen who do nothing after getting crossed make matters worse by leaving a slack line in the water where it’s likely to spin and snare other lines. 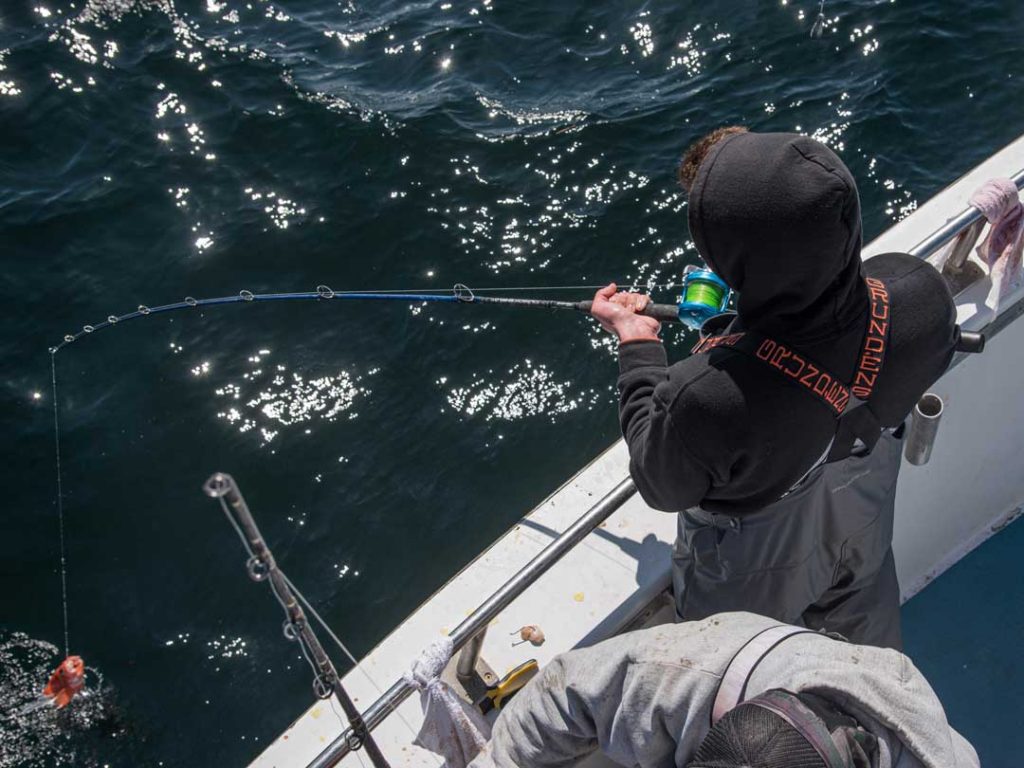 Rig repaired and baited, and anti-tangle advice absorbed, I flipped my reel into free spool and sent my baits to the bottom. Redfish carry a 9-inch minimum size and no bag limit, so each fisherman’s take is limited only by his efficiency at the rail. Bites began as soon as the rigs reached the bottom. Those hoping to maximize their haul of redfish fillets waited a moment or two after hooking each fish to give themselves the chance of a double-header. Before my rig had reached the bottom, 250 feet below, a nearby fisherman with an electric reel had already tossed a fish in the cooler and was making his second drop.

I caught my first fish on my initial drop and took a minute to admire it before flipping it into the cooler. The redfish has evolved for a life in deep water with golf-ball-sized eyes and a big mouth capable of making a meal out of any invertebrate or small fish it encounters. However, the colors of the fish coming over the rail—which ranged from traffic-cone orange to mottled pink—seemed too vibrant for a fish living in the dark, frigid waters of the Gulf of Maine.

Juvenile redfish end up on the menus of haddock, cod, and cusk, but if they can avoid being eaten—and then avoid being caught—they can live as long as 50 years. Despite that longevity, they are extremely slow-growing. The world record Acadian redfish, caught across the Atlantic in Iceland, weighed just 2 pounds, 8 ounces.

While redfish were by far the most common catch, cod, haddock, and cusk also took the squid baits. The cod and haddock had to go back, but cusk were in season and were fair game for the pool money. Dennis Smalley, who’d taken the day off from work to fish with his brother, laid claim to the pool with a big cusk he caught on one of his first drops. Catching a contender for the pool early in the day leaves an angler jealously rubbernecking at every deeply bent rod. Smalley, who spent most of the day laughing and joking with his brother, grew quiet every time a nearby fisherman had a prolonged battle with a fish. Fortunately for him, most of those turned out to be Atlantic wolfish.

Throughout the trip, about six wolfish hit the deck, each one garnering oohs and aahs from the crowd. It is a hideous, yet fascinating fish. It has an antifreeze compound in its blood, packs a set of jaws capable of crushing lobsters, crabs, and sea urchins, and some biologists believe it mates for life.
After years of overfishing and habitat destruction by commercial draggers, wolffish populations have plummeted, resulting in no-kill regulations. Every wolffish pulled aboard the Lady Merrilee was unhooked, photographed, and returned to the depths.

Throughout the day, redfish bites came in waves. Whenever the action slowed down for an extended period, Captain Phil repositioned the boat over some new bottom, and the drop-and-reel action would resume. The full-day trip passed quickly, for me at least. When Captain Phil announced lines up for the last time, I saw Dennis Smalley breathe a deep sigh of relief before cracking open a celebratory beer with his brother.

The mates began cutting early in the trip to keep up with the big numbers of redfish hitting the deck, and they were still cutting on the ride back. I disembarked the Lady Merrilee with a heavy bag of fillets and my hunger for saltwater fishing momentarily slaked.

Later that night, I took four fillets from the bag, spritzed them with lemon, tucked them into a bed of Ritz cracker crumbs, drenched the whole dish in melted butter, and threw it in the oven. Hunger might make the best sauce, but butter makes it better.