Home Freshwater Break Away From Big Structure for Big Tautog

Tautog have become one of the most highly sought-after sport fish in the Northeast. They are, pound for pound, one of the hardest-fighting bottom dwellers in our waters, and their white, sweet-tasting fillets are the base of many comfort food dishes during the cold months.

The growing popularity of tog fishing brings a mob of fisherman to the tog grounds each spring and fall. Tautog live in the nastiest structure they can find–this means rock piles, mussel beds, wrecks, dock pilings, and barnacle-covered sea walls. With the advances in sonar and marine GPS mapping, such structure is increasingly easy to locate. Even anglers lacking this technology can find tog by anchoring along rocks and jetties that extend above the surface. In fact, these can be some of the best places to find big blackfish.

During the early weeks of the fall tog season in Connecticut, many of my favorite tog spots are in 12 feet of water or less, with some as shallow as 3 feet. As the fall goes on and the water temperature drops, fish retreat from the shallower structures to deeper water. They take the opposite approach during the spring season, moving shallower as the water warms.

When tog are shallow, it can be very frustrating to find a rock pile that isn’t occupied by a fleet of boats. On a weekend or even fair-weather weekday, many of the larger reefs become parking lots. There is usually a reason those boats are where they are—these are big pieces of structure that can hold large numbers of blackfish of any size, from undersized fish to double-digit “togzillas.”

Anglers can be successful on these large, well-known reefs despite the heavy fishing pressure and the bumper-boat conditions. However, just because you see lots of boats anchored up on one reef, there are still other places you can go to find quality fish. You don’t have to follow the crowd to catch your tog limit.

I prefer to fish much smaller and often overlooked pieces of bottom. Some are easy to find, even without electronics. I found some of my best spots by patrolling the shoreline on foot or by boat, looking for likely places where blackfish might thrive. This requires patience because not every rock point is going to be productive. In fact, I often work through almost a dozen likely looking spots until I find one that pays off. There have also been times I’ve found fish at every stop I made, especially in the fall, when most rocky structures hold fish—just not necessarily large or keeper-sized ones.

As anyone who has targeted tog knows, sometimes you have to pick through the shorts before you hit pay dirt, which can be very frustrating. Many boats fish all day and catch nothing but short blackfish, but many smaller, lesser-known locations have a better keeper-to-throwback ratio. 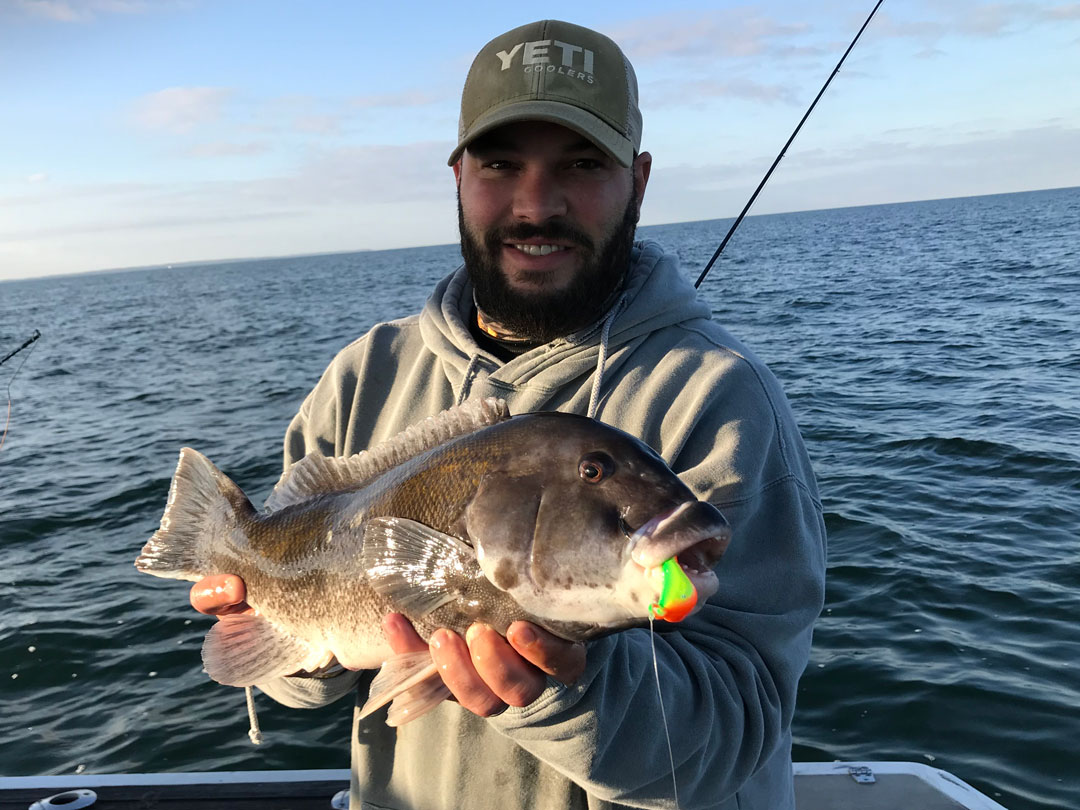 On larger structures, you might fish all day without a keeper while watching the boats anchored around you picking up quality fish. No matter where you fish, you’re likely to catch shorts, but on smaller rock piles, you should be able to find bigger fish faster, if they live there. On many occasions, I’ve anchored up on a new rock and my first drop has come tight to a solid blackfish. Often, I then catch a few more respectable blackfish, but after that, it’s all throwbacks.

This is quite common on tiny rock piles because when you drop down, you’re likely to put your bait in front of the king of that rock quickly. Does this mean that smaller rock piles hold only a few bigger tog? Absolutely not. Sometimes, despite the size of a structure, it may be loaded with fish and you will stay tight all day long.

Another strategy is one I call “fishing the crumbs.” I think of these as small rocks or juicy-looking bottom contours outside the main reefs. This type of fishing requires electronics. Having multiple chart options can be beneficial because one of these rocks may show up on one chart but not exist on another. Better yet is a live-charting feature like Humminbird Autochart Live or Navionics SonarChart Live, which can find structure that doesn’t appear on any map. Tog move between these smaller structures on their way to and from the main reefs or wrecks.

Having a few crumbs tucked away in your waypoints can lead to catching keepers, and even trophies, at the height of the season when the most popular spots have been picked over. Sacrifice a little fishing time this season to go scouting for an out-of-the-way honey hole, and you could be rewarded with light crowds and heavy tog!