Photo above by Eddy Stahowiak

Nymph fishing is an essential tactic for fly anglers who want to catch fish year-round. Dry-fly fishing is always at the top of the list for most fly fishermen, and I love the fun and challenge of matching the hatch on top, but what about when there are no insects showing and no rising fish?

I categorize nymph flies into two categories: attractors and imitations.

An attractor is just that—it attracts trout via shape, color, flash, or the use of unique material. It provides an impressionistic profile of a mayfly nymph, stonefly, aquatic worm, or even a larvae or grub without being a close match.

Guides tend to lean on attractors, especially when no insects are showing. When we tie on attractors, we’re looking for a response from the fish. Sometimes, the response is lukewarm; other times, it can be lights out. That’s why it’s important to remain positive and methodical in your approach when nymphing—you could be merely a fly change away from a banner day.

Knowing when to go specific or use an attractor is usually determined by insect activity. If you know Hendrickson mayflies have been hatching in the early afternoon, it makes sense to fish a Hendrickson nymph in the morning, well before hatch time, since the fish will be on the lookout for those bugs. This is important because trout can key in on a food source to the exclusion of all others, known as selectivity.

Conversely, you may be fishing in the late fall or winter (or even the dog days of summer) when the water seems devoid of bugs. This is a great time to put on an attractor. San Juan Worms, flashback nymphs, Mop Flies, hot bead nymphs, Prince Nymphs, and Hares’ Ears are just a sampling of effective attractors.

A friend who mentored me many years ago told me nymphing is a game of inches—you can be only 6 inches from success. Never has a statement been so true, in my estimation. Trout, especially big trout, rarely move long distances for a tiny meal. If you observe trout feeding on nymphs, you’ll notice they’re often moving side to side and up and down in a small area, close to the bottom (except when there are emerging insects swimming to the surface). Getting your fly to the proper depth is of utmost importance.

Setting your indicator properly is step one. I set mine based on depth and current velocity with the goal of getting my point—or lowest—fly close to the bottom. I want it near enough to occasionally tick. 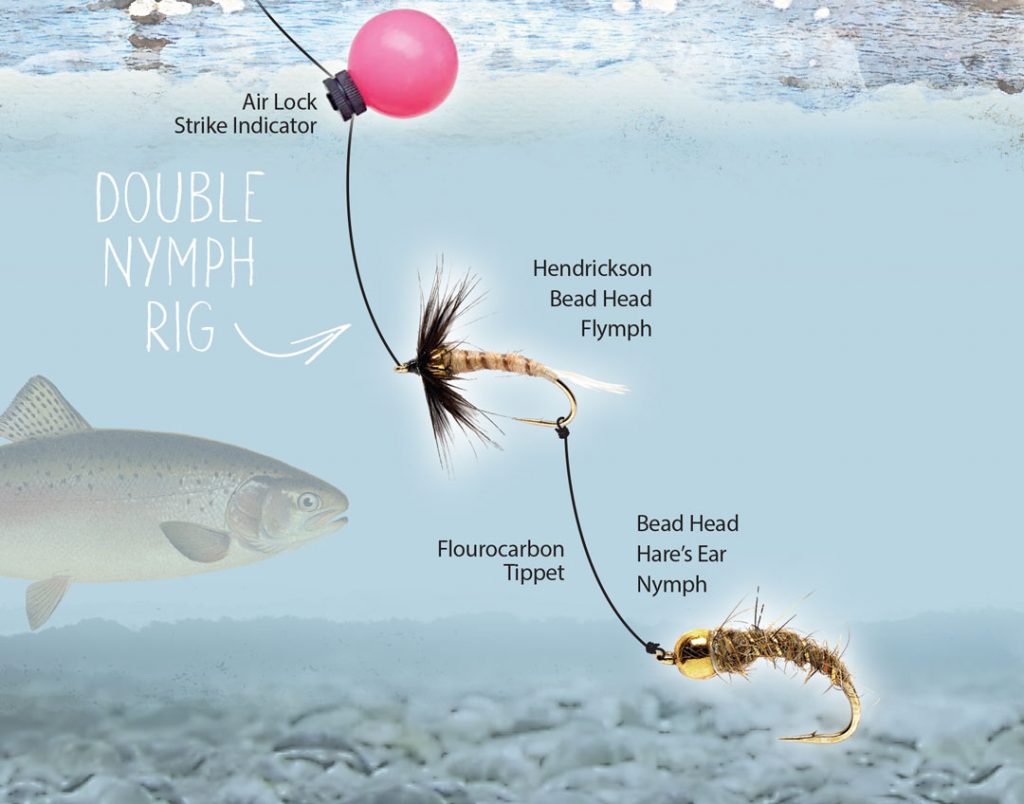 I use screw-top indicators and tie blood knots at each diameter change in my leader. The knots function as indicator stoppers and give me precise depth control. I tie the last blood knot a foot to 20 inches above the top fly on a two-fly rig. This allows me to run drifts in water that’s relatively shallow, two to three feet deep, as well as setting up for deep holes by changing the indicator position. I prefer to use tungsten beads on my nymphs instead of split shots, and I sometimes add weighted wire behind the tungsten beads to make them sink like anchors. I put the heavy fly on the point in deeper water, with a smaller fly above it on a dropper.

When fishing shallow water, I may select a lightweight nymph with a brass bead – or no bead at all – to keep the drift looking natural. I experiment with bead color too; sometimes, the brass disco ball spooks pressured fish. A black or brown bead can really make a difference when trout have seen a thousand brass-bead nymphs float by.

The guiding season for trout typically starts out easy, particularly when the stocking trucks are out. These are the times when every angler you run into is smiling because of the speed at which they are catching these trout. By mid-July, you’ll see a lot of long faces in the same locations and reports that the river is “fished out.” I can assure you that rivers like the Swift, the Deerfield, and the Westfield (all in Massachusetts) are not fished out—the fish that have survived the initial onslaught have become very selective and spook. The experienced guide understands this and adjusts tactics to deal with it.

I switch from bright indicators to white, even downsizing the indicator to tiny sizes, when fishing low, clear water. Sometimes, the presence of any indicator is too much. At such times, I use a grasshopper fly or a highly visible and buoyant emerger like a Klinkhammer as my indicator. This is the western technique called hopper/dropper, which is an incredibly productive tactic for spooky trout, and there’s an added chance of a surface strike should you choose the right terrestrial for your indicator. 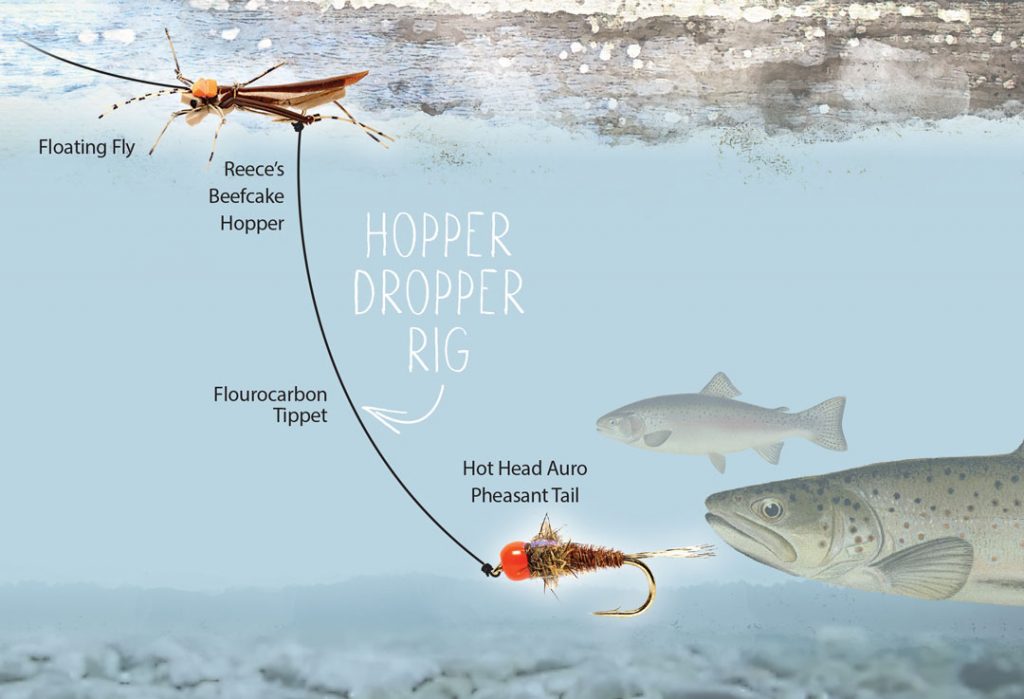 Another tactic is losing the indicator altogether and tight-lining or euronymphing. I rarely incorporate this technique while guiding from the raft, but it is deadly effective. Instead of a visible fly line or indicator on the water, you’re basically fishing a leader with a “sighter” at the connection between the leader and running line to help identify strikes. You can cover all depths by virtue of fly weight and leader setup. I have friends who are high-level competitive anglers and they clean up using this tactic.

Rivers like the Swift in Massachusetts have gin-clear water and highly pressured trout. Often, you’ll see a trout show interest in your fly only to turn away at the last moment. Instead of giving up, try downsizing your tippet 6x (or even 7x) to fluorocarbon and run the same fly through again before you switch. The trout that refused at the last second may demolish the same fly—it happens to me all the time!

Water conditions, weather, and insect activity all impact fish activity and are all beyond our control. The difference between scratching out some fish or getting blanked resides in the variables that we can control. Achieving proper depth, selecting the right fly, choosing the right indicator, and choosing the right tippet will help you achieve success on days when no one else is catching.