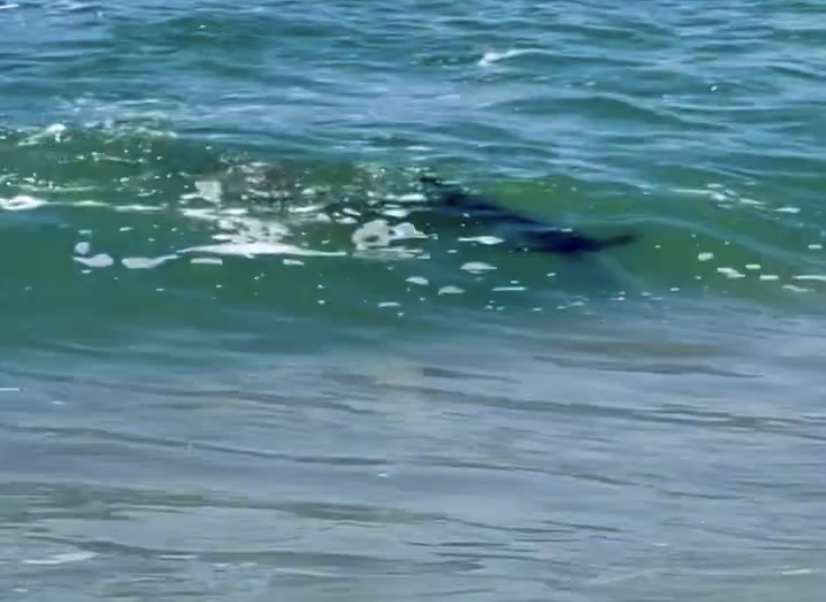 On Sunday July 31, vacationer Lisa Larson captured a remarkable sight; a hammerhead shark hunting just mere feet from the sand of Ladies’ Beach on Nantucket Island. Larson said that a pair of hammerheads had been spotted combing the island’s southern shore one day prior to her video capture. At around 10 a.m. on Sunday, a lifeguard from an adjacent beach had trekked to warn Ladies’ beach bathers about yet another hammerhead cruising the shallows and headed east. By 11:30, Sunday morning beach traffic had heightened, and uninformed swimmers began to filter into the water. Then, nature showcased its unnervingly awesome power once again.

“I am laying in my towel, and I see these five people in their late twenties start sprinting from waist deep in the water, pointing” Larson explained. Her husband instantly suggested that she point her cell phone camera, allowing more than just the day’s sunbathing crowd to see the shark activity. When asked if anything seemed peculiar about the shark’s behavior, Larson said “The prior day and earlier that day, they seemed to be hunting for food. They were kind of circling; they’d swim one way then back the other way”. The footage of the bloodied bluefish clearly confirms Larson’s suspicions. The hammerhead’s feeding habits mirrored those of a starving, well, bluefish, “And it basically cut the head off the fish, lost it, and then came back and found it again… It was almost wrestling the fish. I think the fish was a little feisty.” Any seasoned saltwater angler is aware of the inherent aggression of bluefish, and Larson’s description fits the bill.

As is the case with most large predator sightings, feelings of reverence and respect clash with fear and anxiety. “We were kind of bummed.” Larson stated, “It was exciting to see it, but we don’t really love the new visitors because we like to swim.” Sharks have been traversing and feeding increasingly close to shore on Cape Cod and the Islands over the last few years. While protective measures such as shark-deterrent buoys, shark-spotting planes, and a snowballing of public concern will help prevent attacks, it is difficult to shun thoughts of tragedy. Swimmers and anglers alike should be careful in the surf as it seems large shark species such as the hammerhead are also searching shallow waters for their favorite catch. With summer shark activity in full swing, keep your eyes peeled in the surf and listen to local officials should a spotting be made.