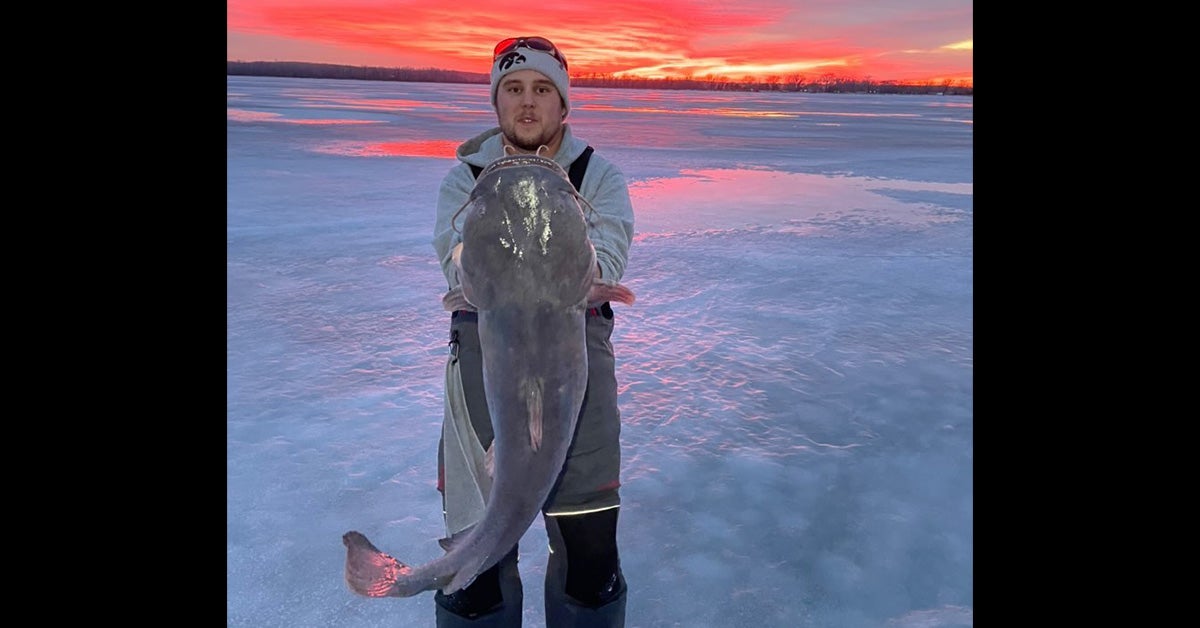 Gavin Campbell, 24, of Council Bluffs, Iowa, was soaking live minnows through the hard-water at Lake Manawa on January 31 when he felt a tug—a strong one. Campbell, who works as a recreational aide at Lake Manawa State Park, had hooked into the biggest fish he’d ever caught while ice fishing: a 34-pound flathead catfish. “The fight was unlike anything I’ve ever caught through the ice,” he tells F&S. “It was constant power. It was a whole new battle to get that big of a fish to turn its head on a rod and reel that wasn’t meant for something of its size.”

Campbell says that he couldn’t have landed the brute without the help of his buddy Ryan Higginbotham. Campbell is a lifelong fisherman and says he’s caught a “decent number of catfish through the ice.” But this one was not only the largest flathead catfish he’d landed while ice fishing, it was the largest fish he’d ever caught on the hard-water. Campbell measured the fish at 40 inches before releasing it. That length easily qualified Campbell for the Iowa Department of Natural Resources (DNR) Master Angler Program, which recognizes anglers for exceptional catches. The Iowa DNR’s minimum length to qualify a flathead catfish for the Master Angler Program is set at 35 inches.

“Surprise! That’s no panfish,” wrote the Iowa DNR in an Instagram post highlighting the catch. “That’s a 40-inch, 34-pound #IowaMasterAngler flathead catfish!” And yes, the agency verified with its fisheries staff that Campbell’s catch was, in fact, a flathead catfish and not a blue catfish.

“Catching it was a real rush,” says Campbell. “That was followed by relief for landing him at the perfect time for a picture. It makes me feel like all the time I spend on the ice paid off.”