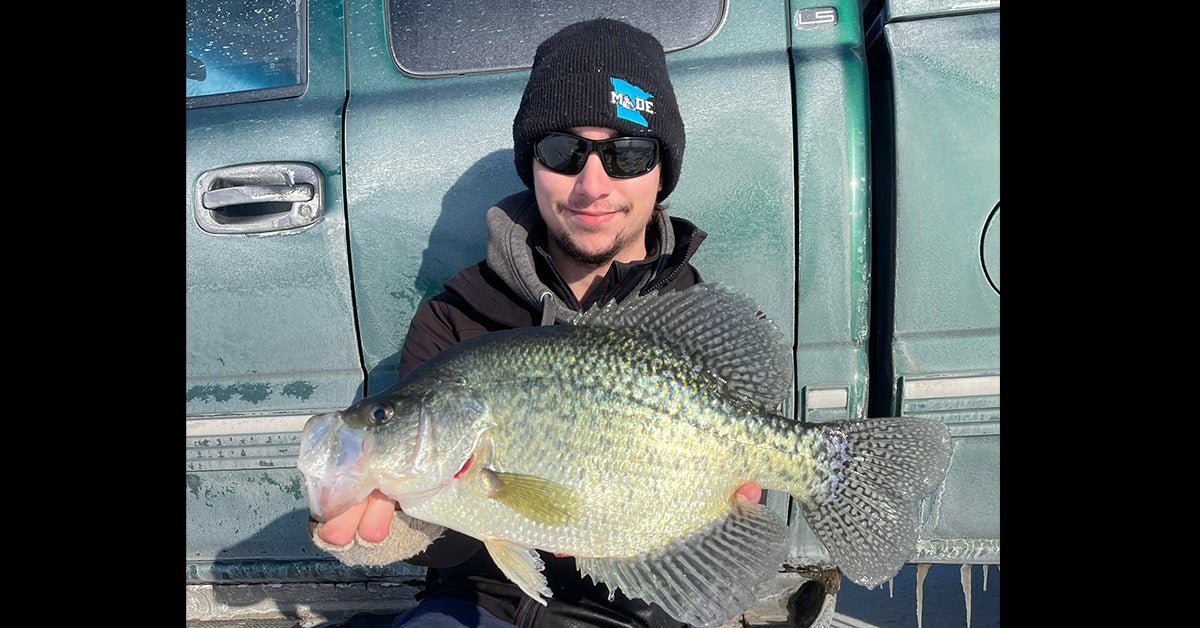 Wyatt Williams of Bloomington, Minnesota, recently landed a panfish of a lifetime. He was fishing the hardwater with his buddy Bobby Beattie on a small undisclosed lake just outside the Twin Cities metropolitan area on February 25, 2022.

Armed with a live scope, Williams and Beattie spent the morning chasing schools of fish through the ice. They landed a couple of 12- and 13-inchers, which is pretty big as far as panfish go. But it wasn’t until 3:30 that afternoon that Williams hooked a true monster.

Williams was working a Clam Outdoors 1/16-ounce gold/black jointed Pinhead Minnow when he set the hook on what he thought was a small bass. But after bringing it to the surface, he realized it was a white crappie—a big one.

“We just sat there for 20 seconds in complete awe,” Williams told Premier Angler. “We knew immediately this fish was something different. It was unlike anything we’d ever seen.”

Williams quickly hurried to get accurate measurements, while Beattie set up a DIY live well for the fish to rest in. The slab weighed an incredible 3 pounds, 1.7 ounces. It was 17.75 inches in length with a 15-inch girth. It was easily Williams’ new personal best crappie, easily surpassing his previous PR, which weighed just over a pound. The anglers safely released the fish.

“A lot of years have gone into Bobby Beattie and I’s search for a truly giant crappie and today, on a high-pressure bluebird sky day, it finally happened,” wrote Williams in a Facebook post. “ At 17.75 inches and 3 pounds, it may be years until I see another like it!”

For the time being Williams, who owns W2 Custom Rods, says he plans on switching to targeting bluegills for a while. His goal? Catch one above 1.5 pounds.