I was raised in northeast Ohio during the 70s, the son of a dedicated crappie fisherman. Rabid would be more like it. My father, Mick, would spend every weekend adrift on Berlin Reservoir in his 12’ Sears semi-V dunking minnows amongst the yellow flowering flooded willow bushes. It’s what he did, and as such, it’s what I knew.

Things were simpler then. His rod was a retrofitted no-name fly rod.  The rigging was also simple—old school braided salt ‘n pepper line with a tensile strength in the ballpark of 8.43 metric tons. He used a #4 Eagle Claw snelled hook; Crimp-on Water Gremlin, with tabs, roughly the size of a pea—a big pea; and the omnipresent red ‘n white round bobber, all capped off with a 3” minnow hooked lightly under the dorsal fin.

His fishing equipment never changed—even down to the Hersey’s with almonds and a single can of 7-UP he always bought at Les’ Bait Shop at the ramp. Sometimes, albeit rarely, the Old Man would hang a wire spreader under the red ‘n white round float, one arm dangling a minnow, the other a chartreuse marabou jig tipped with a minnow.

Crappie fishing is a bit different now in the 21st Century. There are high-tech rods, fluorocarbon lines, micro-jigs, artificial baits, spider rigs, crappie-specific crankbaits, and on and on. That’s not to say my old man’s minnow under a bobber doesn’t still work; it can, and often does. But the tackle box of ’22 doesn’t look near the same as dad’s all-metal Old Pal box.

So what would today’s ‘ultimate crappie tackle box’ look like? What might it have in the rows upon rows of trays? Would it be a mix of old and new? And does it need to be all fancy and expensive and weigh roughly that of a small whitetail buck? Not really, but it should have the essentials, and to me, those would include the following.

The Tackle Box Itself 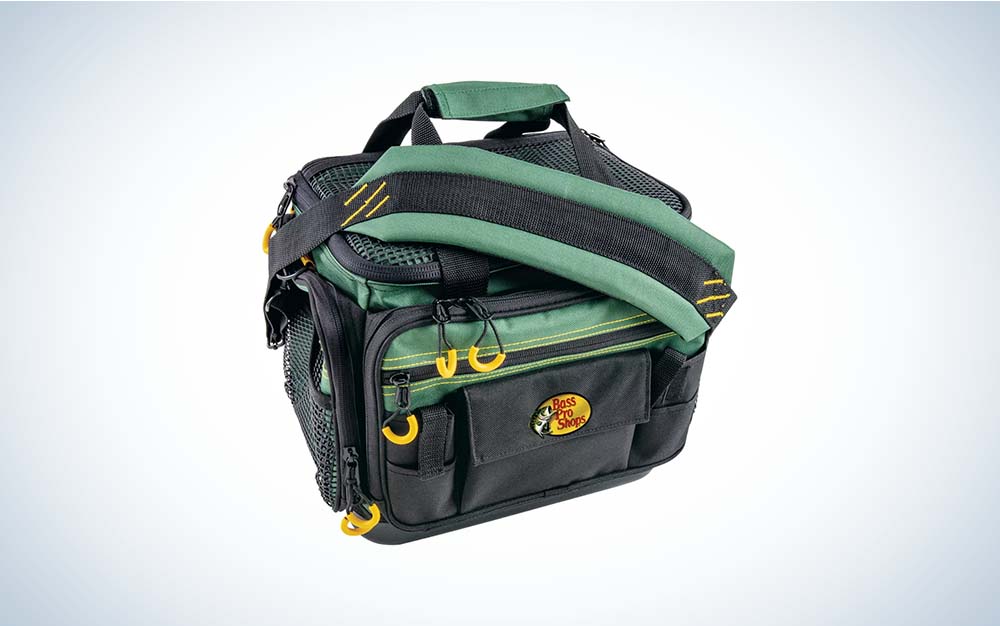 I’m partial to a soft-sided tackle bag rather than a hard box; something with a shoulder strap, plastic trays with inserts to compartmentalize the rows into smaller sections, and roughly 1,400 cubic inches of storage space, give or take. I look for a rugged waterproof bottom and at least one waterproof zippered pocket for my cell phone, wallet, keys, and anything that should stay dry. Bass Pro Shops offers a nice one in their Advanced Anglers II bag. Piscifun has a backpack, also with hard plastic trays (4), that works well, especially for walk-in anglers.

The Best Line For Crappie Fishing 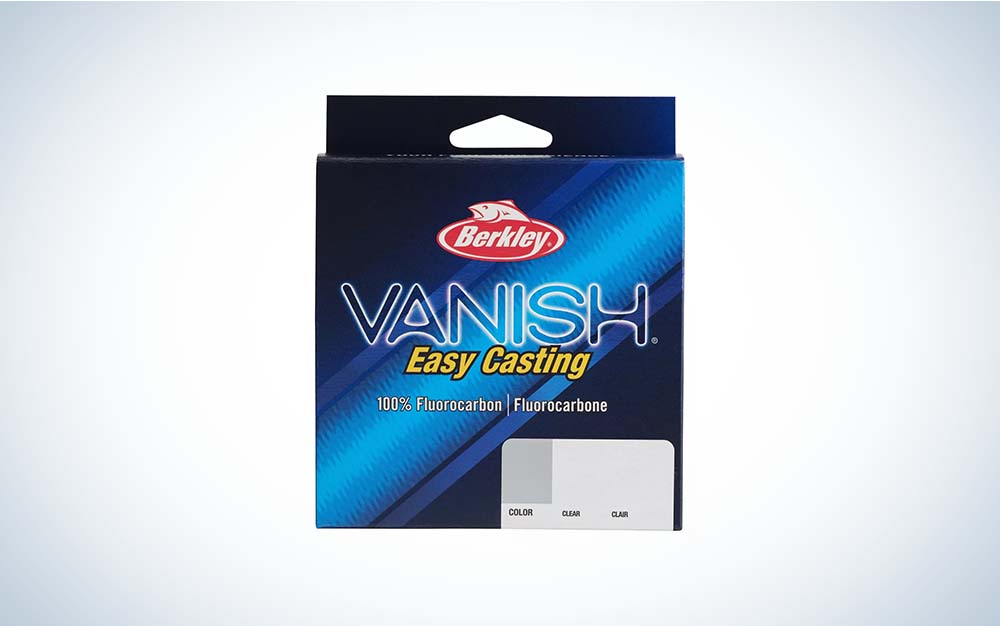 Crappies, especially those in clear water, can be a little line-shy, and this makes a damn near invisible fluorocarbon line a good choice. My spinning reels—Pflueger President #20—are spooled with 4 pound Berkley Vanish fluro in Clear, and I’ll pack another spool in the bag just in case.

I’ll admit it. I’m still my Old Man’s son, which means my bag will include an assortment (Pro-Pack) of removable Water Gremlin split-shots should I decide to go Old School and run the snelled hook/bobber rig, which I do. But I also bring a small selection of bell-style swivel sinkers in ⅛- , ¼-, and ½-ounce sizes for those times I’m drop-shotting plastics, which isn’t only for bass but can be a killer crappie technique, particularly on scattered and/or deep water fish.

A selection of small snap swivels—Size #12 through #18—for drop-shooting and when throwing inline spinners and crankbaits is essential. I’ll have black, not gold or silver. I want the fish striking the bait/lure, and not the flash of a snap swivel.

The Best Floats For Crappie Fishing 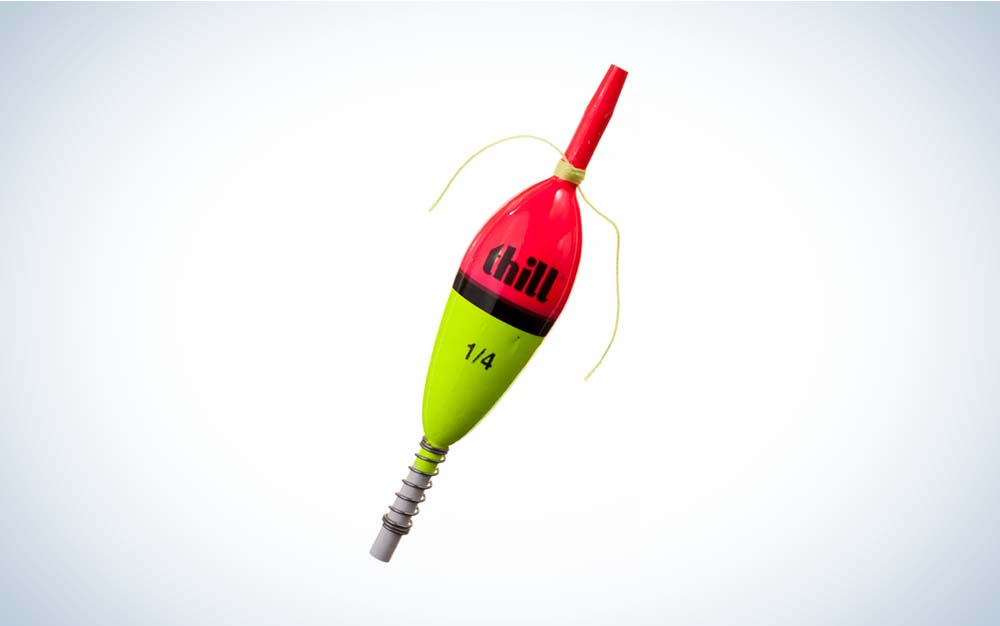 Gone—sadly—are the red ‘n white round bobbers; so, too, is the Snoopy Bobber, though either one will still work in a pinch. Today if you need a bobber, any bobber, the folks at Thill will have it. My bag always has a variety of sizes, but two styles – one, a pencil (cigar) shaped spring float that attaches static (fixed) to the line, and the second, a slip bobber, along with the needed bobber stops and beads. However, Thill does offer a hybrid in their Crappie Cork, which serves double duty as both a fixed float and a slip bobber. I have a 1/8- and ¼-ounce hybrid, but typically use either a spring float or a slip bobber. Nice to have, though.

The Right Kinds of Hooks For Crappie Fishing 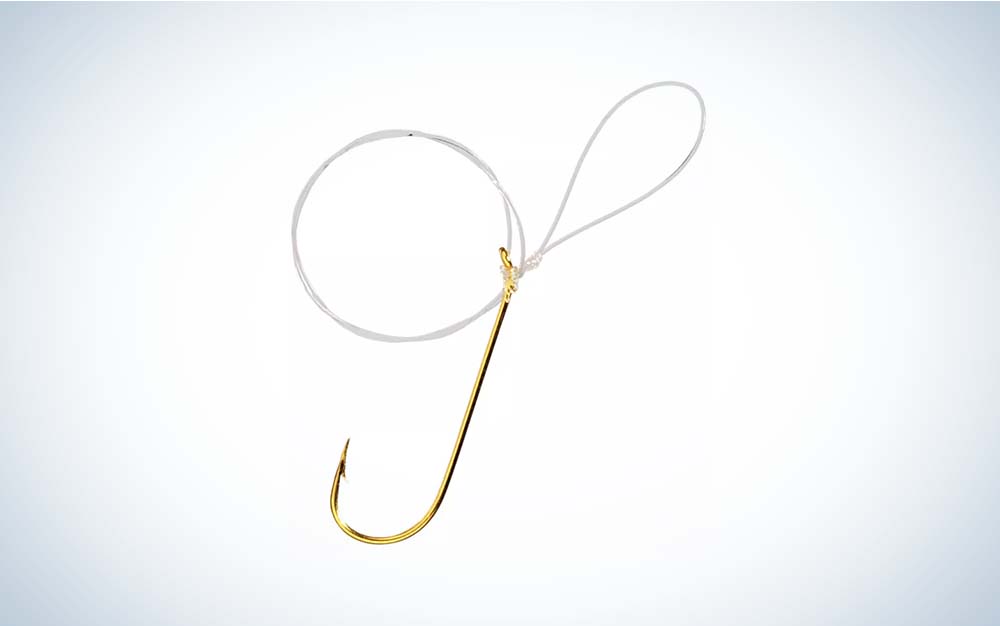 I keep two or three flat packs of Eagle Claw #4 snelled hooks are in my tackle box along with an assortment of #4 gold Aberdeen style hooks, which are perfect for fin-hooking lively minnows. They’re strong, but flex and straighten out during the inevitable snaggy situations. Finally, I keep a value pack, of non-snelled Aberdeen hooks, available from a number of sources including Eagle Claw, Mr. Crappie, and Gamakatsu.

3 Kinds of Jigheads for Catching Crappies

So, here’s where the tackle bag begins to really take on some weight—not in complexity, but in volume. First, jig heads. My trays will hold plenty of the following.

1/64 through ¼ ounce, painted and unpainted. I have the molds, hooks, and pounds upon pounds of lead, so rolling my own isn’t a problem. The colors are foundational—black, white, red, yellow, orange, and always chartreuse. 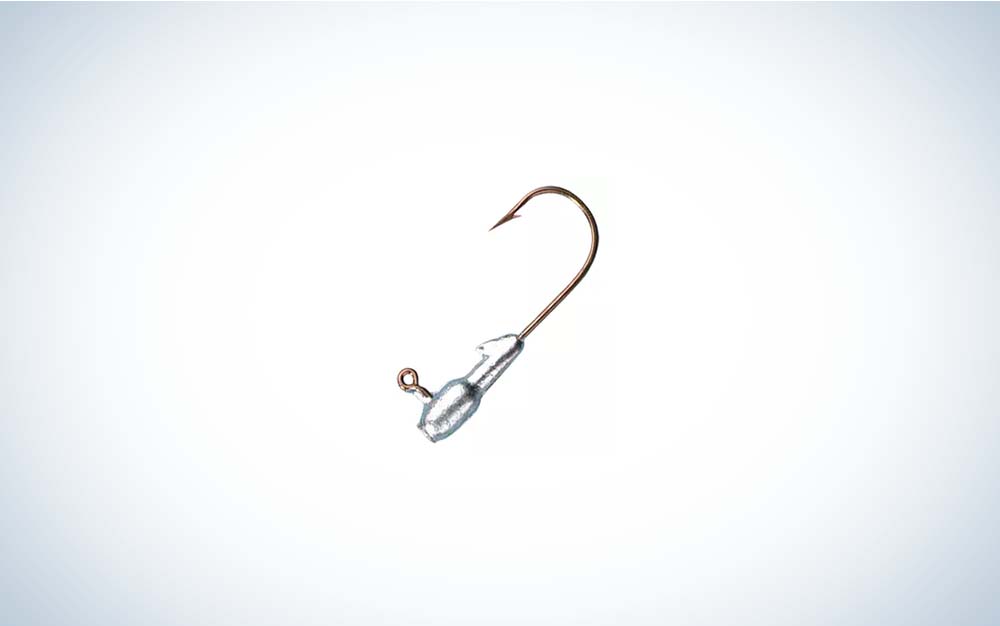 Bullet-shaped jig heads can be used in conjunction with smaller tube jigs. I buy them unpainted as a cost-saving measure.

I’ll pack both the willow and Colorado-style blades with these popular jig heads. Sizes to include 1/32 through 1/8 ounce; the colors are also basic like chartreuse, white, and black.

My father was a believer—at times—in the effectiveness of an old-school marabou feather jig tipped with a minnow, and I follow in his footsteps on this count. I usually have half a card (5) of 1/16, ⅛,  and ¼ ounce jigs in yellow, white, red, and chartreuse.

If there were one word synonymous with crappie fishing, it would be jigs—more specifically, perhaps, soft plastic jigs. The good news about soft plastics? The selection is almost infinite. The bad news? The selection is, well, almost infinite. And this makes it somewhat difficult for the angler new to crappie fishing to pick half a dozen from among the hundreds. That said, I’ve managed to narrow my choices in the soft plastics world down to just a handful. These have made the cut and live in my tackle bag. 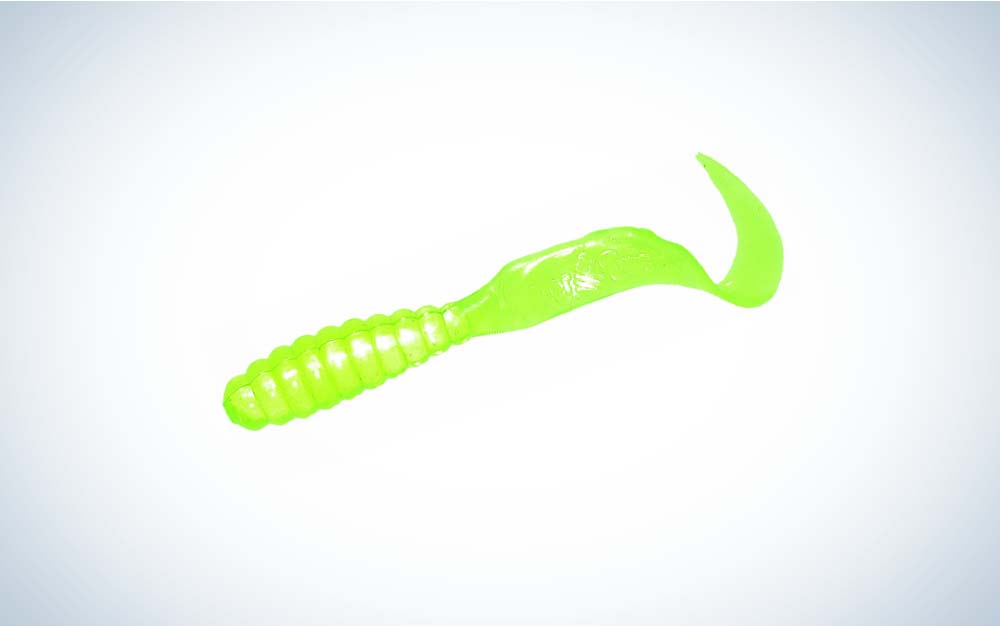 But first, a note on color. Crappies can be extremely color-selective, often with even a slight change taking you from zero to hero in a cast or two. To this end, lure makers offer their soft plastics in a painter’s palette of hues. Mister Twister, for example, lists their 2-inch Teenie Curly Tail grub in 40 different patterns. Do you need all 40? You do not; however, I would suggest having the basics—red, yellow, white, black, and chartreuse—along with combinations of those, plus a handful of off-beat selections, like flake, pearl, and neon, and anything that resembles a minnow or small shad, such as silver flake. Too, there are colors or color combinations that just seem to produce on certain waters, so it’s worthwhile to stop at the local bait shop and ask.

Also called twister tails, these small plastics catch a ton of crappie each year. Two-inch and 3” are Go-To sizes for specks.

These odd-shaped plastics mimic a baitfish like tiny shad, almost move for move, so they’re in there, and in both the 1-3/4- and 2-1/2-inch sizes.

I was just recently introduced to Freaky Frank’s plastics by a good friend and crappie devotee here in Washington state. I don’t know why they work as well as they do, but they do. I’m running both the 1-3/4-inch Lil Freaky Worm and the original 2-1/2-inch Freaky on 1/32 and 1/16 heads. Colors? Stonewall Silver, Phantom Pearl, and Black/Chartreuse.

Tube jigs and finesse work, in my opinion, go hand-in-hand. A crappie guide in California, Ed Legan of Clear Lake, turned me on to Berkley’s tube bait—the PowerBait Atomic Teaser—and it’s worked well for me here at home on Silver Lake. 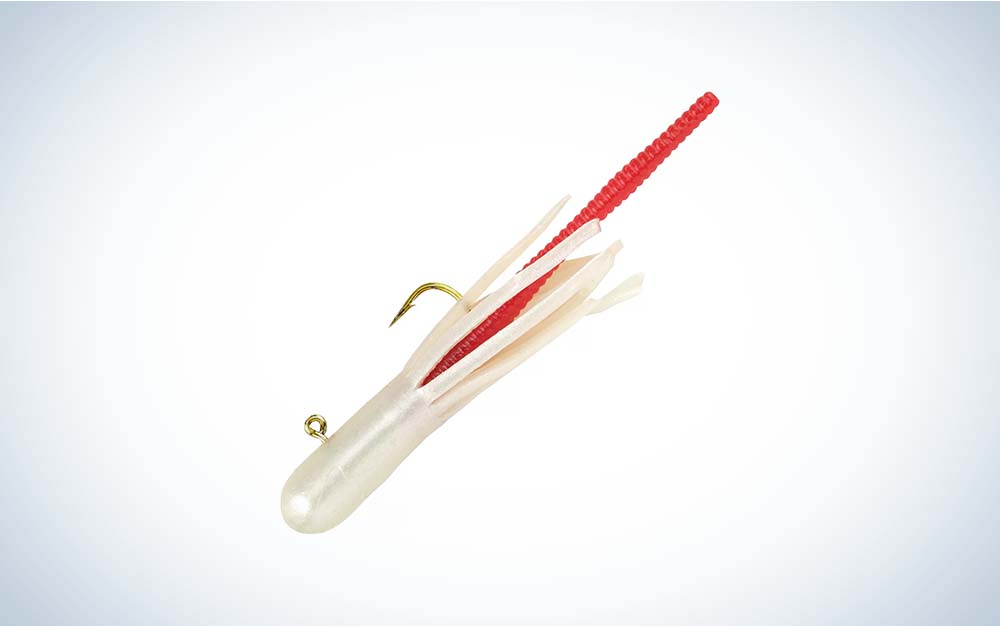 The Best Artificial Baits For Crappies

In some parts of the country, particularly out West, the use of live minnows is prohibited, the concern being the introduction of non-native species. Makes sense, but the prohibition pulls the Number One crappie bait out of the equation. The answer? Fake baits such as Berkley’s GULP! Minnow, Paddleshad, or Crappie Nibbles, the latter working well when inserted into a tube jig. So these all find their way into the tackle bag. 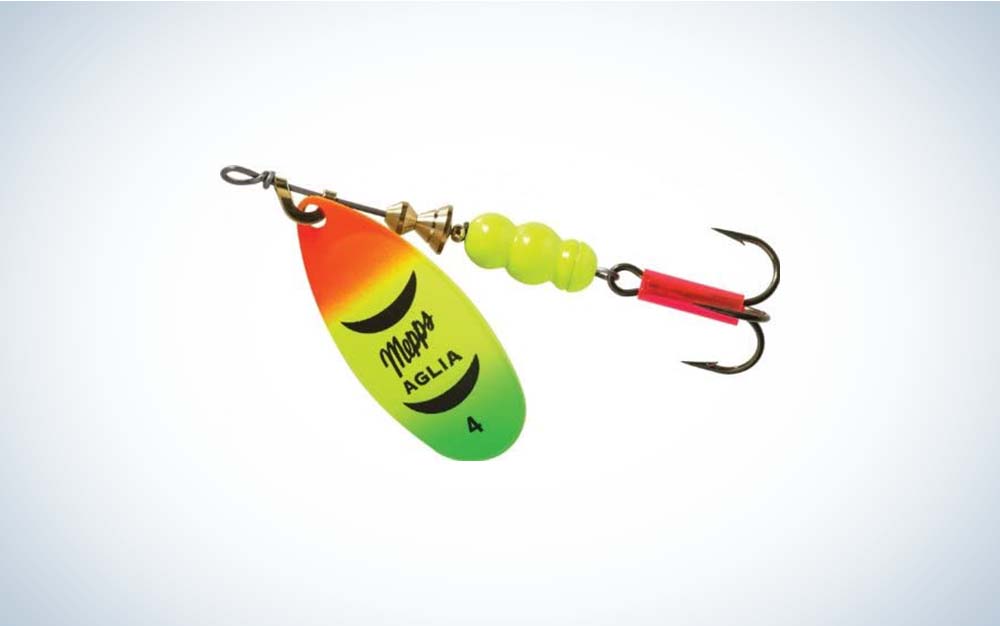 And last but certainly not least, there are three trays devoted to spinners in my tackle box, which help tackle big crappies. Smaller inline spinners, such as Mepps Aglia, both in #0 (1/12 ounce) and #1 (1/8 ounce) sizes, and in Black/Yellow/Red, Firetiger, and my personal favorite, Rainbow Trout. Others in the tray include the Old School C.P. Swing, Yakima Baits’ tried and true Roostertail, and one of the greatest inline spinners ever crafted, the Panther Martin Classic in black with yellow dots (The Bumble Bee) and a silver blade. That one just plain catches fish.