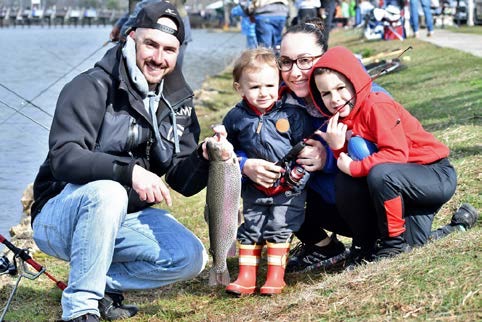 After a 2-year involuntary hiatus, the beloved Trout Contest for Kids enjoyed a successful return to Spring Lake on Saturday April 9th. An early morning shower gave way to mixed sun and clouds and a hearty west wind, allowing families and their children to enjoy a splendid day just a few blocks off the Jersey coast. The hot chocolate and coffee were brewing early, and dozens of bagels and donuts were handed out to hungry young anglers eager to catch their prize.

Just before things got started, Spring Lake Mayor Jennifer Naughton took a moment to greet our crowd and share a brief tribute to Chris Hueth, who played such an instrumental role in this event over the years until he unexpectedly passed away a year ago. He is so deeply missed by the SRSA family and the shore community, but without question, he watched over this event with much pride. Shortly after she closed with Chris’ notable “catch ‘em up” phrase, the opening gun was fired and landing nets were hitting the water around the lake. Throughout the first hour, many trout were landed and brought to the scale, generating lots of smiles and anticipation for the afternoon’s prize ceremony. The appetite of the fish slowed down as the day passed, but there was plenty of other activity to keep the anglers and their families busy.

The truck from the Musky Hatchery arrived around 11 AM to drop off another bunch of trout for the lake, and our kitchen crew started serving up the hot dogs and chips shortly thereafter. Our good friends at Jersey Shore Pirates had the face-painting in full swing, and the Ralph’s Italian Ices truck was serving up plenty of treats to quench those sweet tooths. The trout weren’t the only creatures involved in the day either, as Rizzo’s Wildlife World was on scene to share hands-on experiences with crocodiles, toads, chinchillas and more. Meanwhile, our local heroes of the Goodwill Fire Company had their truck on site to allow folks to take their chance at shooting a live fire hose at a target.

In the end, it was a great day for all and a triumphant return for this 20-year-old tradition. Thanks once again to all our participants and their families, and especially to all our sponsors and contributors, without whom this event would not be possible. See below for a summary of our prize winners, samples of the gracious compliments people have offered, and a few photo highlights. Can’t wait to see you again in 2023!!