At 3 a.m., I knew there was no chance of going back to sleep. I had to be on the road in a couple of hours to get to Sayreville, and I was just too electrified to think of anything but the day ahead. I got out of bed and shuffled downstairs.

As I thought about the personal day I’d scheduled months before, I felt like whatever was in front of me would be just another light-filled confirmation of the here and now. I guess I just felt alive for the first time in a long while.

Depression runs in my family like the aquifer that runs under my house foundation, though I haven’t had either one confirmed. No one wants to talk about it, but when the basement gets damp, I know that the darn thing is under there. That’s depression and anxiety for my family. I know that much of that is genetic, but I have added to it with my own life choices and individual decisions.

2020 brought enough anxiety for all of us, and 2021 wasn’t the explosive rainbow-drenched euphoria that everyone expected. I started going on first-aid calls again once I was vaccinated, and I hadn’t lost a step, but triggers lurk everywhere when you walk into a stranger’s house. My first call was a man with a debilitating anxiety attack, so much so that he presented like he was having a stroke. It was definitely a tough situation, but everything worked out and I found myself making a connection with him. He was a new father, so we talked about our kids.

I thought of that guy as I made instant coffee and sat on the couch, deciding if it was time to go yet. Our kitchen was being remodeled, and I had been cooking on a hot plate in the basement and drinking instant coffee for weeks. I was ready for it all to be done and back to normal. The kids liked the sense of adventure that running between open studs offered, but I was getting tired of sawdust, delays, and cost overruns. I wanted solace back in the house when I closed the front door.

My rods were already assembled in the Jeep, and I’d even tied on flies—the biggest, chunkiest ones I had in the box. They probably weren’t big enough, and I hoped my companion would have some to loan.

I was nervous and excited because I had never fished with Captain Eric Kerber before. I knew him only as the irreverent, essential, and hilarious cohost of Joe Cermele’s Hook Shots web series. Kerber is a striper specialist and has been running boats for the better part of 9 years on the Raritan Bay. His prowess in finding schooled up and hungry fish while there was still frost on the guides and cold rain in the air was legendary from Tuckerton to Perth Amboy. I was ready for anything, but most of all, I was ready to meet up with the genuine article—a guy who has quietly gone about the business of finding fish and doing with it with a joke, a smile, and the notion that a fishing trip should be embarked on with joy or not at all. I knew it was too early, but I left anyway.

“This is what a guide’s trunk looks like,” Kerber said with a deep chuckle as he opened the liftgate in his Tahoe. Inside was a tackle shop. He had every rod, reel, hook, plug, plastic, fly, and line to catch anything that swam between the Outerbridge and Cape May.

We exchanged a few jokes in the parking lot as the early morning light settled over Morgan Marina, and I got it out of the way early that I was a big fan of Hook Shots.

“That started out as a wild idea Joe had and just grew. We were two punk guys who wanted to do something that showed how much fun you could have fishing without any of the bullshit,” Kerber said, standing at the helm of his 28-foot center console, the Isi Rose, named for his two-year-old daughter. He had a linebacker’s build, inked forearms, and the weather-beaten face of many days and nights in hard wind, but when he talked about his daughter, he lit up. We traded kid stories and it was clear how much Kerber loved his family. The universalities of proud fathers are the same along every piece of water on the planet.

After agreeing that our kids were growing up too fast, we finally set off. He guided us out into Raritan Bay as the wind picked up and the rain hit us sideways. It was perfect April striper weather. 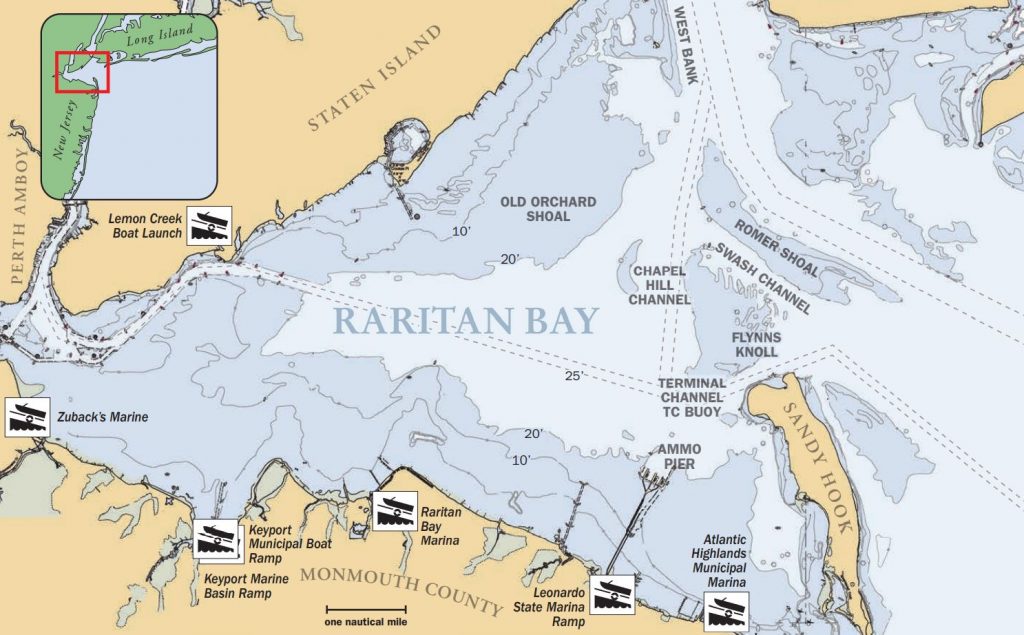 The Raritan Bay is unique in its placement. Expansive urban sprawl surrounds the water on all sides. Freight cranes and refinery pipes dot the landscape like massive redwoods. The Outerbridge, Verrazzano bridge, and Raritan Railroad bridge all sneak across the water like tendril vines, and in each tucked away corner of the Bay, the chance for a hungry striper is real, but you have to know where to look and when. Kerber’s fish sense was ready.

We moved up the Raritan River proper past South Amboy and into where the industrial parks load and unload the mountainous cargo that keeps America satisfied. The river was chocolate brown, and cement chunks, broken pilings, old docks, and refuse floated, the flotsam and jetsam of the most densely populated state in the country. In so many ways, the tailwaters of the Raritan are an environmental nightmare. And yet, as I would come to understand with Kerber’s help, the hospitable zones prove to be incredibly fertile for stripers and baitfish. This river is one of their many spawning sites, and we hoped it would be a quick stop on their way upriver.

Kerber flung swim shads with ease, and we were into fish on our first drift. I was determined to stick to the fly rod, and I remember him saying, “I love that you’re fishing the way you want to fish.” He was a calm coach who offered short, digestible pieces of advice, every one of which paid off.

Kerber then built his fly rod, and we began firing off sinking lines into the Nesquik that swirled around us. He started us on a downstream drift as the tide was heading out. The boat moved at an easy pace, and the Lowrance was full of marks. Even though there was an oil refinery next to an abandoned factory on shore that looked like a Superfund site, we knew fish were there.

We both turned toward the refinery when we began to hear what sounded like a 747. We didn’t see a plane; instead, we saw a flame shooting up into the air as if Drogon, Smaug, or some other fantasy serpent was angry. A gas pipe was clearly malfunctioning and sending flames arcing up. I had about 50 feet of line out with a modified lemon/lime fly in the style of Joe Cordiero. A striper hit with intensity as the first of what would be a cavalcade of emergency vehicles began to populate the shore. I could feel the shoulders on the fish as it dove and began to violently shake its head.

Kerber shouted with joy and began to snap pictures of my rod bent to the water while grabbing the landing net. Meanwhile, the refinery pipe was still burning. The fish fought and ran, fought and ran. It was healthy and meaty on the line. When we finally got it in the net, it was 30 inches long and girthy. My smile was as wide as the riverbank, and as I released the fish, the fire department was beginning to contain and knock down the pipe fire.

There were fist bumps and back slaps. Kerber seemed happier than I was as he said, “Okay, let’s do that again!”

We set up once more, and we did do that again—all day until the tide shifted. I learned about Kerber’s life as a professional guide and his work with Cermele’s new series B-Side Fishing. The first episode chronicles a late-summer lobster-pot hop for mahi-mahi. Kerber is one of the few New Jersey captains who books dedicated mahi trips, so we hatch a plan to throw flies at them in the coming months.

As the day closes, I marvel at just how good the fishing was and just how alone we were. Kerber knew exactly where and how to find the stripers as they headed upriver, and he does it with a joyous and hilariously infectious attitude. The day is one I will not soon forget. It was the early-season ice-breaker that I hope means clear heads and tight lines for the months ahead.