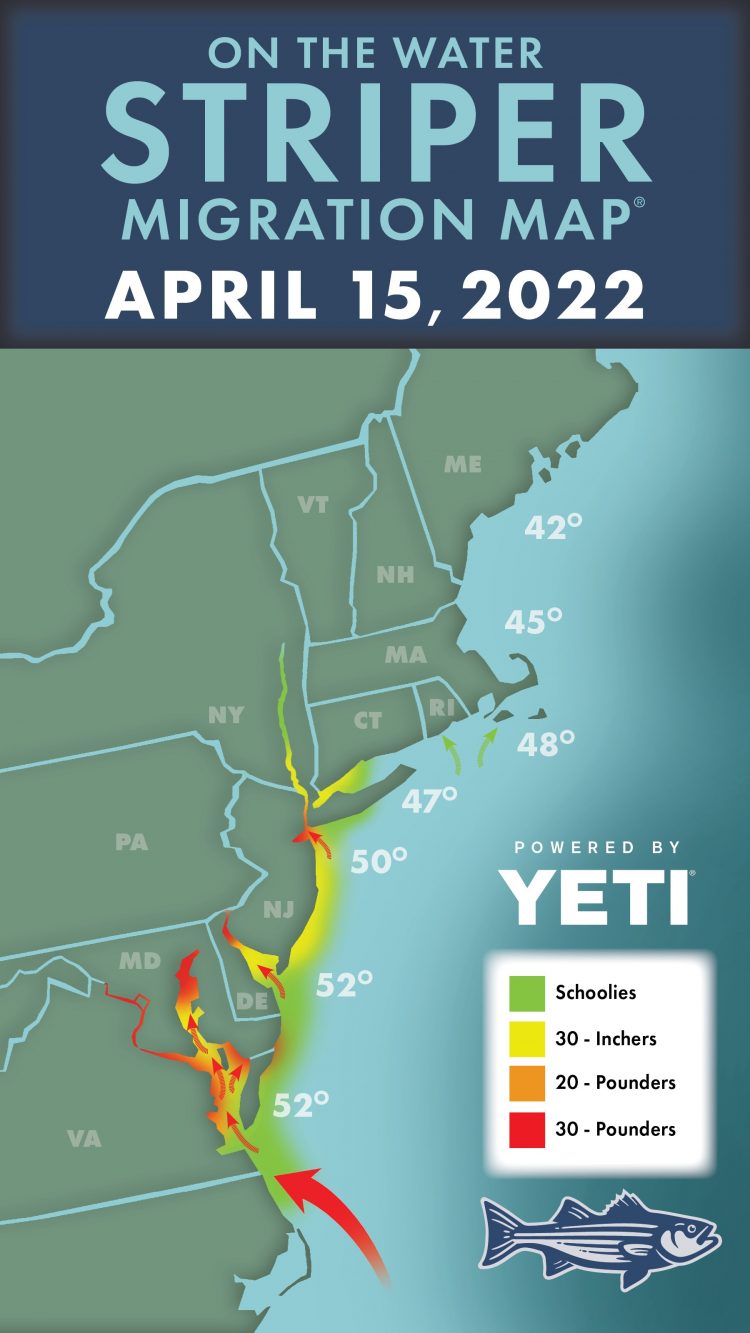 Waters are warming quickly, as spring finally seems to be here to stay. Spawning is happening in the Chesapeake, and a fresh wave of large pre-spawn stripers has reached the Raritan Bay. Migratory schoolies have been reported as far north as Martha’s Vineyard, as of Thursday.

Also, today is the deadline for public comment on Amendement 7 to the Striped Bass Management Plan. Any striper fishermen who wants to share their views on how they’d like to see the striped bass managed needs to do so before 11:59 p.m. tonight. For more information on how and why you should speak up for striped bass, visit the following link: Speak Up TODAY on Striped Bass Management – On The Water

The Maryland waters of the Chesapeake remains closed to striped bass catch-and-release fishing to help the fish avoid stress as they prepare to spawn. According to the Maryland DNR, spawning is beginning to take place in the Chesapeake Tributaries.

“The spawning populations of striped bass are holding in the Choptank River waiting for water temperatures to rise a little more to their liking. There has been a small amount of spawning and with air temperatures predicted to be as high as 80 degrees this week, the spawn will surely kick into high gear. During this time the Choptank River is closed as is the Bay to all catch-and-release fishing for striped bass. Pre-spawn striped bass will be passing through the middle Bay the next couple of weeks as they head up to the Susquehanna Flats and River to spawn.”

In fact, this action is what fishermen are finding throughout most of the state, until you get to the Raritan Bay, where large stripers have moved in and are feeding heavily before making their spawning run up the Hudson River.

Striped bass season opens in New York today, April 15. Western Long Island Sound is fishing well, as more and larger migratory fish arrive. Toward the eastern end of the Island, it seems to be predominantly holdovers, but migratory schoolies will continue to move east.

Schoolie stripers are feeding well in the Connecticut tidal rivers, and an increasing number of “slot” size fish are being caught as well. An influx of herring into the rivers has had the larger holdover fish more active in recent days.

As of Thursday’s fishing forecast, “fresh” migratory stripers hadn’t yet been reported in Rhode Island, but with migratory fish reaching Martha’s Vineyard, it should be a matter of days (if not hours) from the posting of this week’s Striper Migration Map.

On Thursday, April 14, striped bass were caught on the ocean beaches of Martha’s Vineyard, and upon close inspection, those stripers had some hitchhiking sea lice on their sides. This is right on time with the typical arrival of migratory striped bass on Martha’s Vineyard, and over the next week, “fresh” stripers should appear on the South Side of Cape Cod and in Buzzards Bay.