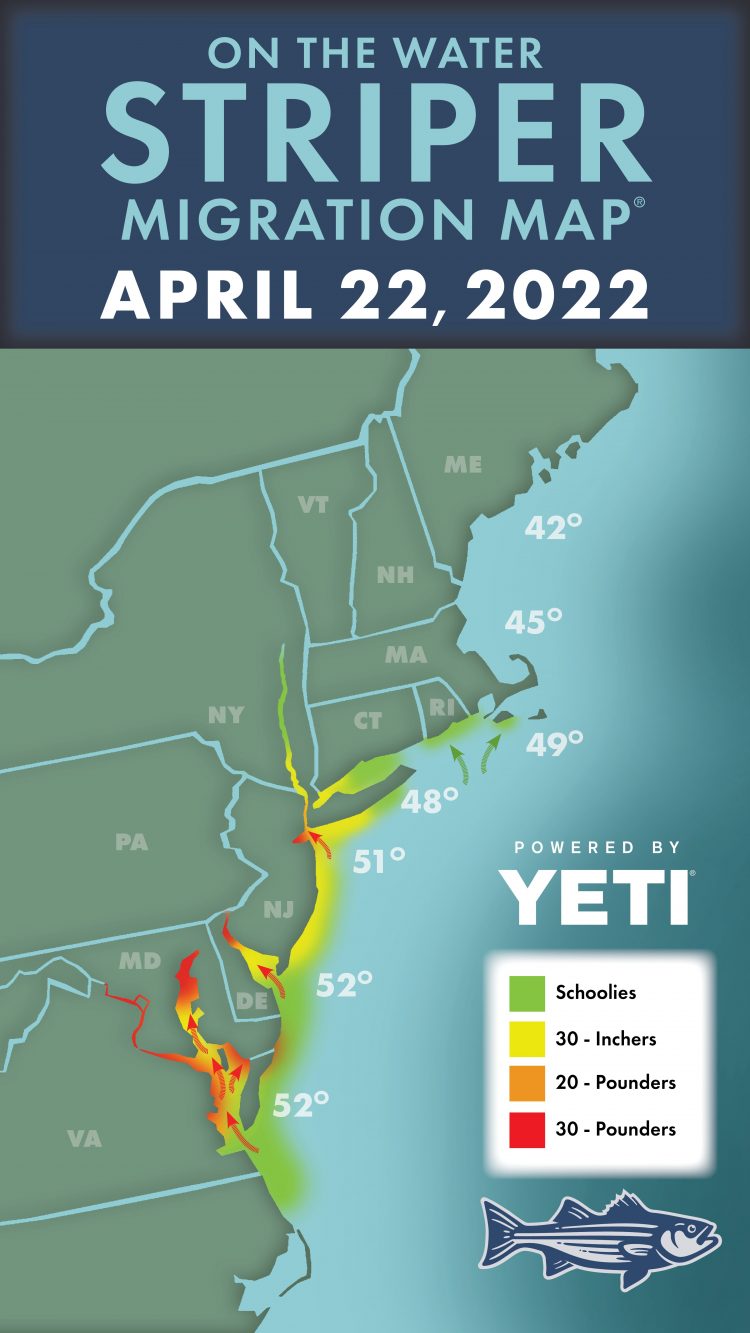 After a post-Easter storm, spring weather has returned and waters are continuing to warm. Spawning is happening in the Chesapeake, and a fresh wave of large pre-spawn stripers has reached the Raritan Bay. Migratory schoolies have been reported in Connecticut, Rhode Island, and southern Massachusetts.

The Striper Cup starts on May 1! Now is the time to sign up. Everyone who joins before May 1 is automatically entered to win a gorgeous new YETI V Series stainless steel cooler!

The Maryland waters of the Chesapeake remains closed to striped bass catch-and-release fishing to help the fish avoid stress as they prepare to spawn. According to the Maryland DNR, spawning is taking place in the Chesapeake Tributaries.

“The spawning populations of striped bass are holding in the Choptank River waiting for water temperatures to rise a little more to their liking. During this time the Choptank River is closed as is the Bay to all catch-and-release fishing for striped bass. Pre-spawn striped bass will be passing through the middle Bay the next couple of weeks as they head up to the Susquehanna Flats and River to spawn.”

Big striped bass are moving up the Delaware River to spawn.

In fact, this action is what fishermen are finding throughout most of the state, until you get to the Raritan Bay. This world-class striped bass fishery is producing stripers up to 40 pounds for boaters and beach anglers on plugs, bait, shads and on the troll.

Striped bass season is off to a good start on Long Island. Western Long Island Sound is fishing well, as more and larger migratory fish arrive. Slot-sized stripers have been reported in the surf spreading east through Suffolk County. Hudson River fishing has been slow thanks to cold rain and snow runoff, but conditions should improve over the coming week.

Schoolie stripers are feeding well in the Connecticut tidal rivers, and fresh migrating schoolies are flooding into western Sound harbors.

Fresh migratory stripers started moving into Rhode Island waters this past week. Most of the fish are 12 to 18 inches, but a few 24 to 28 inch fish have been reported. Remember to use single hooks when possible and pinch your barbs to take care of these catch-and-release fish.

Schoolie striped bass are being caught on the ocean beaches of Martha’s Vineyard, right on time with the typical arrival of migratory striped bass on Martha’s Vineyard. There have been a few reports of fresh striped bass located on Cape Cod and on the South Coast. This looks like a good week to start hunting the estuaries and rivers for the first migratory schoolies, as numbers should increase over the next week.