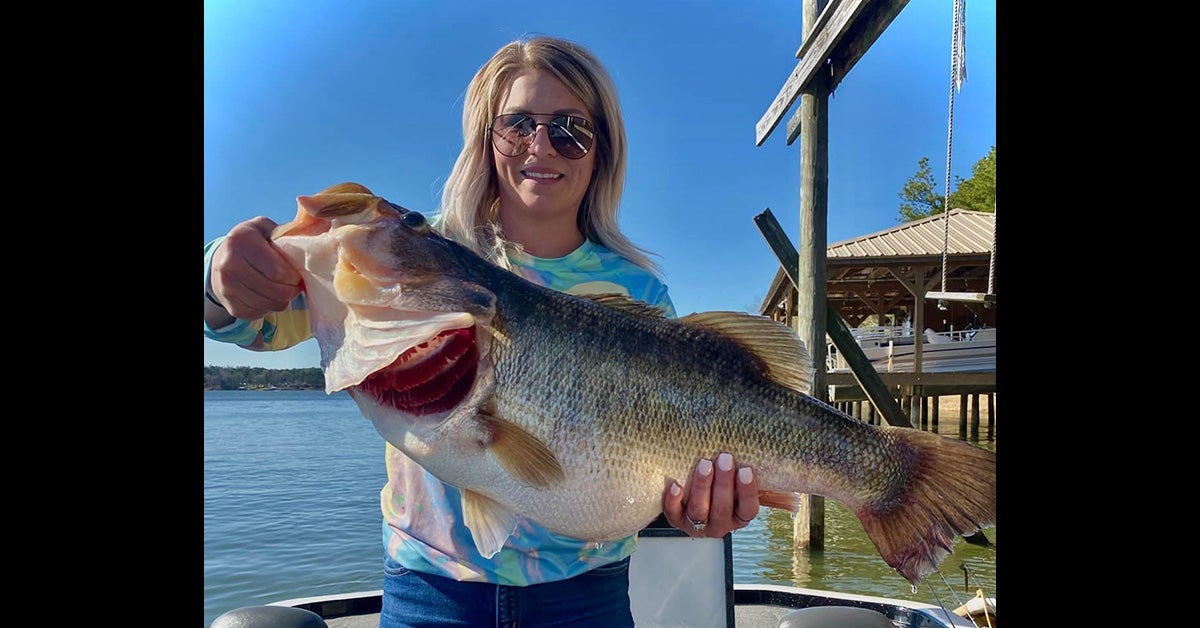 A last-minute decision to get in a little fishing before heading to her children’s baseball practice resulted in a bass of a lifetime for angler Kellie Renfro. After launching her boat on 2,200-acre Lake Nacogdoches in east Texas on March 10, Renfro and her husband eased up to a secondary point where her husband quickly boated a two-pound bass. Renfro was fishing off the bow of the boat when she felt a small bite, set the hook, and then thought she was snagged. “I turned to my husband and said, ‘Well, I’ve hooked a stump,’” Renfro told KLTV television. “Seconds later, that’s when [the fish] started pulling drag, and when I realized I had just hooked into the largest fish I have ever felt. The fight was on.”

The battle lasted 10 minutes with the big fish pulling drag, jumping twice, and circling around the boat a couple of times before Renfro’s husband netted the hen largemouth. Renfro caught her bass on a V&M Baby Swamp Hawg Watermelon Red lure. She was using a Dobyns rod paired with a Lew’s spinning reel that was spooled with P-Line Floroclear line.

After boating the big fish, Renfro immediately contacted the Toyota ShareLunker program, a unique initiative by Texas Parks and Wildlife that promotes the growth of monster-sized bass. A staff member from Athens quickly arrived to weigh the bass and collect biological data. The fish measured 26 inches long with a girth of 23.5 inches.

Texas anglers who reel in 13-plus-pound Legacy Class bass between January and March 31 can typically “loan” them to TPWD for the ShareLunker selective breeding and stocking program. But this year, so many fish have been caught in the 14-plus-pound range—including a 17-pounder from O.H. Ivie Lake—that officials decided not to use Renfro’s fish for the program. Instead, it was safely released back into Lake Nacogdoches.

The Toyota ShareLunker program offers four levels of participation for catching bass over eight pounds or 24 inches in Texas. Anglers who register any lunker in the program during 2022 receive gift merchandise, a decal for their vehicle or boat, VIP access to an annual awards event, and are entered in drawings for lifetime licenses and cash awards.

Renfro’s bass is the fifth largest lunker collected under the ShareLunker program on Lake Nacogdoches. The largest was a 15.34-pound beast caught in February 2020 by Joe Castle. Her bass was Lake Nacogdoches’ first ShareLunker of the year. TPWD says that it’s also the first Legacy Class Bass entered by a woman since March 31, 2018—nearly four years ago.