My first boat, a 20-foot 1985 Shamrock opened up a new world of striped-bass fishing for me. Before buying it, I had primarily fished from the surf or from larger vessels. This boat allowed me to sneak within casting range of the boulder-laden shorelines of the Elizabeth Islands—making a bit more use of the full skeg than I’d care to admit—where stripers greedily ate my live eels. The Shamrock still brings back warm memories of a first boat, but when I upgraded to a Skeeter 22 in 2005, my first bay boat, I found a design that fit my home waters (and my fishing style) like a glove.

The bay boat has long been a favored style of southern and Florida fishermen, anglers just as likely to creep through shallow backwaters as blast through an inlet to chase larger fish along the oceanfront. Bay boats are characterized by a shallow draft and a smooth ride. They are designed to be easily maneuvered in tight spaces, yet are stable enough for open-ocean ventures. Bay boats are further distinguished from typical center consoles by their low-slung gunwales, raised casting decks on the bow and stern, and multiple livewells.

My Skeeter 22 could fish all the same places as my Shamrock, plus a heck of a lot places the Shamrock couldn’t go. Perhaps most important to me at the time was the extra speed the Skeeter provided. I had bought the Shamrock at a more carefree time in my life, but by 2005, I was juggling my work schedule alongside the sports and school schedules of four teenagers. Fishing had to fit into narrower windows than in the past, so the ability to shave significant minutes off the rides to and from t`he grounds meant time for a few more precious casts.

Versatility is a key characteristic of a bay boat. Over 15 years, my Skeeter 22 has felt just at home on freshwater ponds while bass fishing as (on the right days) chasing school bluefin off the back side of Cape Cod. A bay boat’s versatility extends beyond fishing, though, since the boat doubles as a platform for family watersports like tubing, cruising, and water-skiing—which, in 2005, also factored into my boat-buying decision.

After the recession in 2008, it seemed like everyone looking to buy a boat had that same versatility in mind. The spartan, fishing-only battleships were giving way to boats that could fish hard one day and be a comfortable family boat the next. Bay-boat manufacturers were quick to adapt, adding creature comforts like padded seats and a full head.

By 2020, bay boats had gotten bigger. At one time, almost all bay boats were 16 to 22 feet, but over the last decade, boat manufacturers began offering bay boats up to 32 feet, along with all the extended range that comes with a boat that size. They were built to accommodate more power, while improved chines threw water away from the boat to provide a drier ride.

With my children grown and starting families of their own, it was time to upgrade again, and perhaps lean back toward the “fishing machine” side of the spectrum without fully eliminating the creature comforts.

Enter the Skeeter SX2550, which has a number of advantages over the 22. For one, I mounted the 300hp Yamaha on a jack plate, which eliminated the need for an engine well and expanding the fishable platform in the stern. I can comfortably fish four anglers, and even without a T-Top, I can cast right from the helm without any obstructions—an advantage I regularly put to use during the 2021 albie season. The T-Top is less important to Northeast anglers than fishermen down south, and eliminating it opens up substantially more casting space.

While the 22 Skeeter had ample in-deck storage and hatches, the SX2550 has all of that plus storage under the console. This gives me plenty of space to pack foul-weather gear, more tackle than I could ever use in a single day, and enough food and drinks to keep my kids and grandkids happy during a day on the water.

I also added a Minn Kota Ulterra with Spot-Lock capabilities, which has made tog fishing more accessible than ever. While I may have a little more fishing time now than I did in 2005, I still value the efficiency of using Spot-Lock over potential tog structures instead of having to drop an anchor. It’s helped me explore more areas in my home waters and find a few tog honey holes that go mostly unnoticed by other anglers. And, the wind doesn’t grab a bay boat as much as higher-gunwaled vessels, which means the trolling motor doesn’t have to work as hard to keep the boat in place. This gives me more battery life, and more tog hot spots to investigate.

With my second full season aboard the Skeeter SX2550 about to begin, I can’t wait to see all the fish and locations I can enjoy. While I’d never trade my years in the Shamrock for anything, I think it’s safe to say that, from now on, I’ll never be without a bay boat. 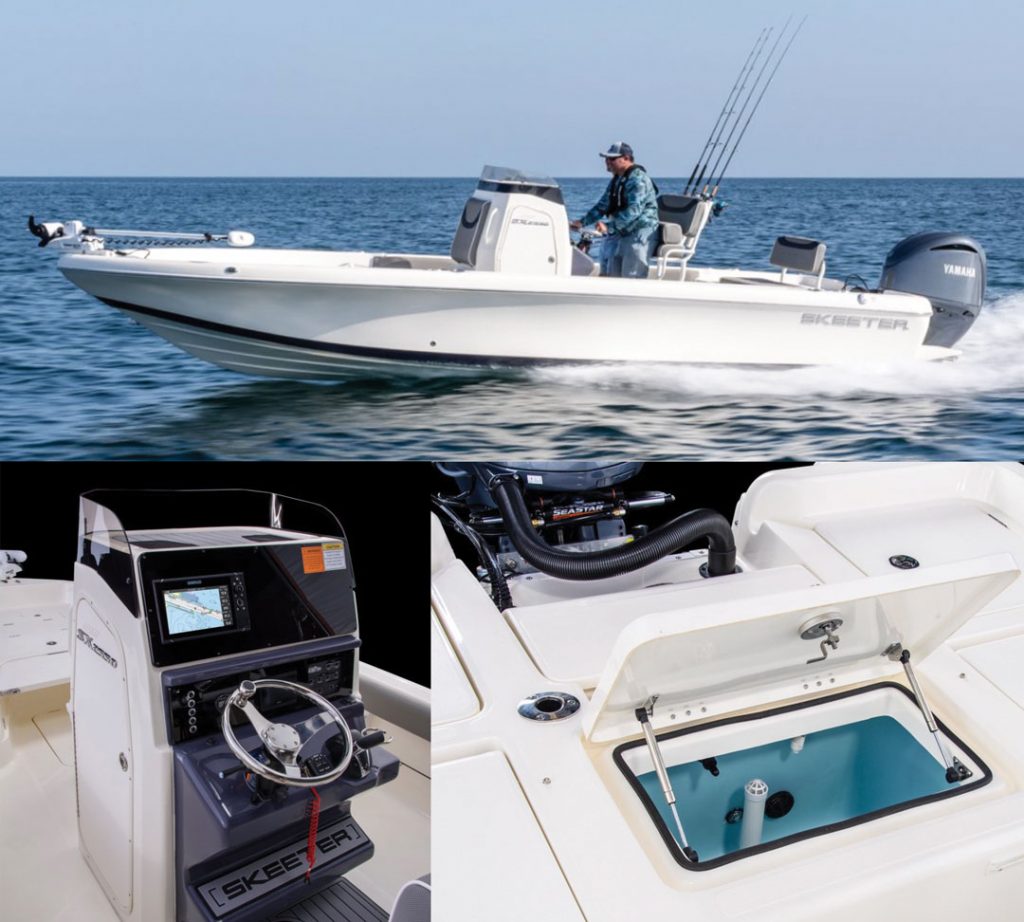 Length: 24’6” | Draft: 14” | Max HP: 300hp | Fuel: 76 gal.
The Skeeter SX2550 covers both inshore and nearshore fishing while being a comfortably family cruiser. A 3-position step can switch to deck extension or table. In the bow is an insulated 145-quart fish box with macerator. The gunwale heights and Carolina flare boast a distinguished look and drier ride. 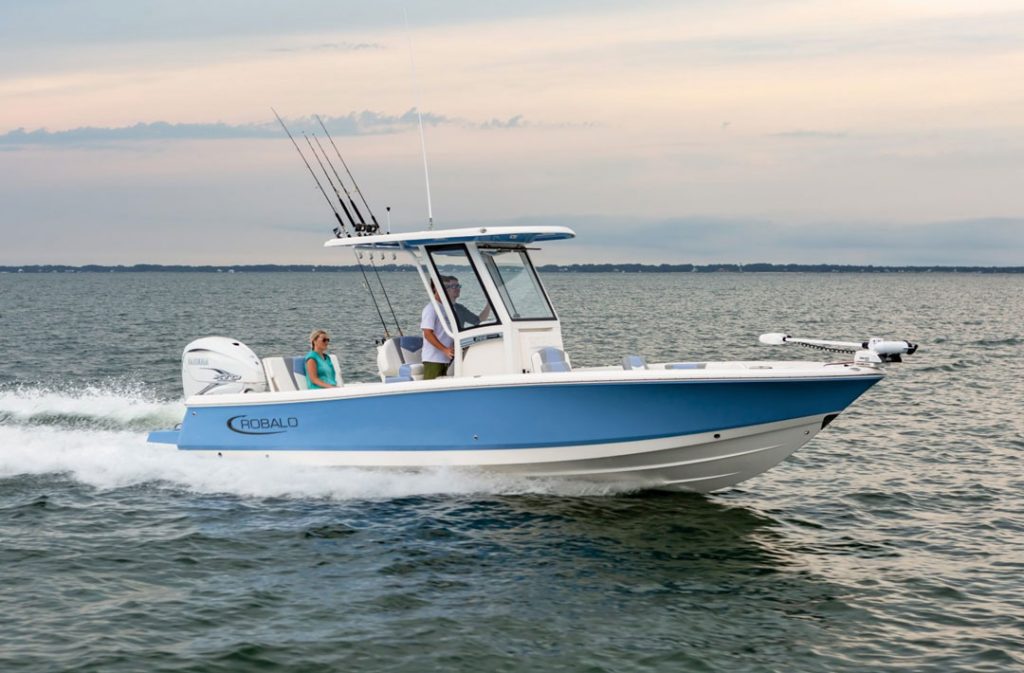 Length: 26’6” | Draft: 20” | Max HP: 425hp | Fuel: 110 gal.
Built to handle offshore adventures or family cruises, the new Robalo 266 Cayman features bow and aft seating areas that convert to casting platforms. The impressive helm setup has space to add up to 2 large electronics displays between the stainless-steel LED pushbutton switches. With innovations that serious fisherman rely on and comfort features that the family expects, the 266 Cayman is a versatile vessel. 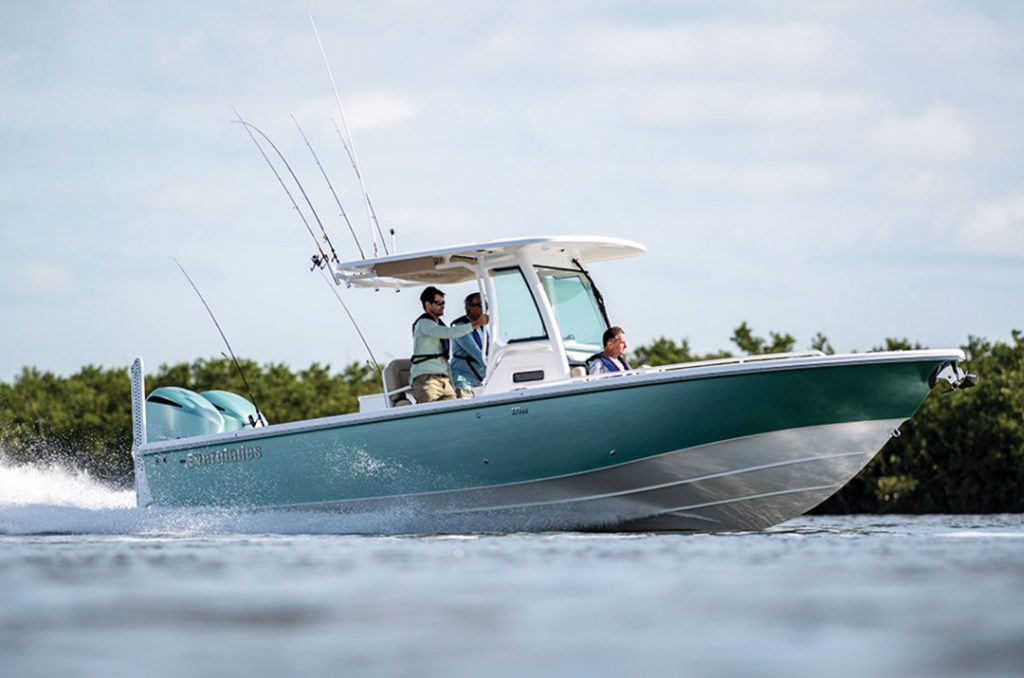 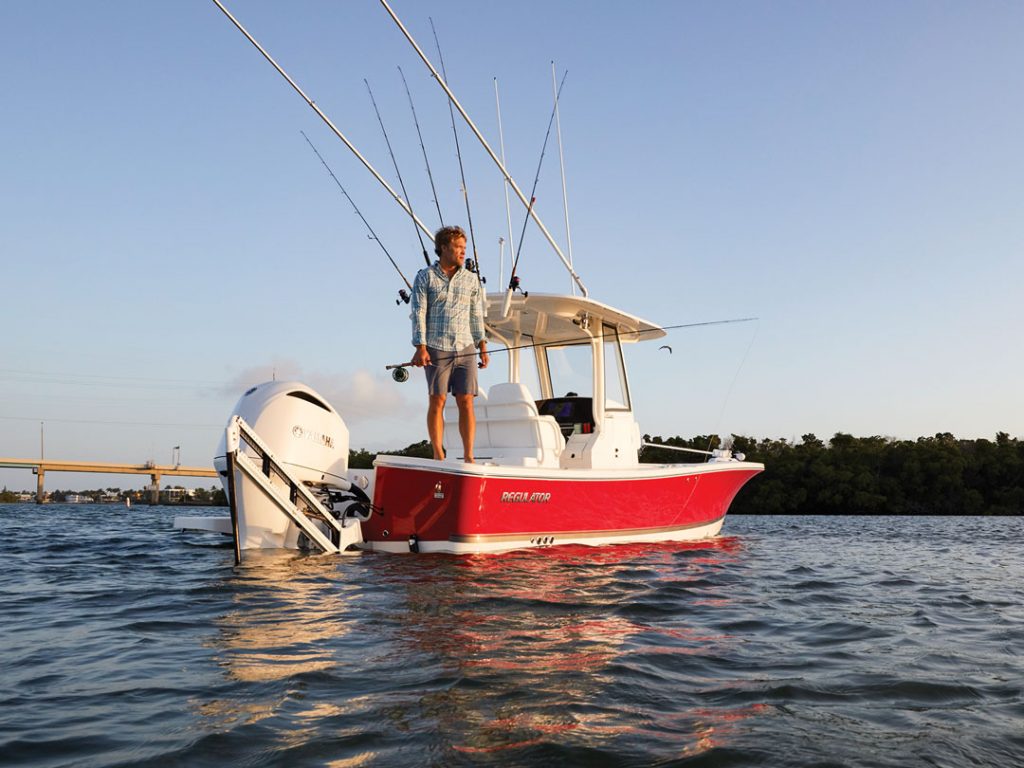 Length: 26’9” | Draft: 15’.75” | Max HP: 425hp | Fuel: 107 gal.
The Regulator 26XO is a center console “crossover” that provides easy access to lakes, bays, and skinny water, as well as the capability to head offshore when the conditions are right. More than 122 square-feet of deck space, spacious seating, and generous storage means both fishability and family comfort. Built-in coolers, a stand-up head compartment, forward and rear sun-shade options, and an optional removable watersports tow bar mean you can stay and play until the sun goes down. 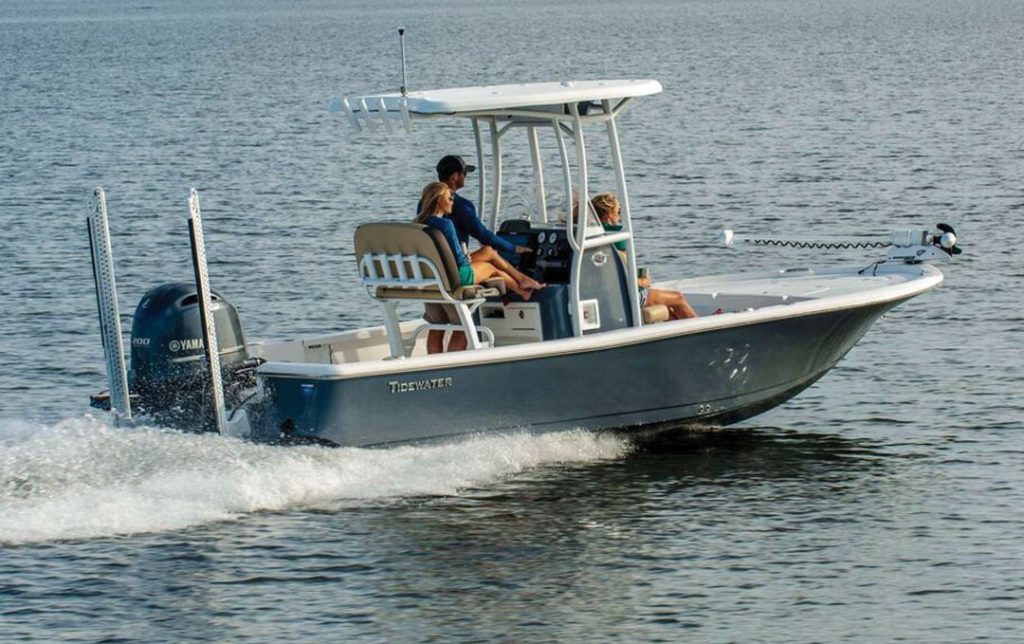