There is perhaps no greater thrill in fishing than when a striped bass whirls on your topwater plug. Eyes laser-focused, a wave of adrenaline rushes over, and there’s nothing else on your mind except working the lure in a way that will get the fish to commit. To the uninitiated, it’s just a splash, but to you, it’s one of the most exciting parts of striper fishing.

Throwing topwater plugs is my absolute favorite way to catch striped bass and my lure bag reflects that – it’s loaded with all different kinds of pencils, spooks, and poppers. Most of my fishing takes place around dawn, dusk, and right through the middle of the day. If there’s a storm passing through, these plugs really shine.

I’ve spent many hours experimenting and modifying my topwater lures, and some of my results benefit both the fish and me.

My go-to early-season plug is the Rebel Jumpin’ Minnow in bone color. It has cemented itself as a classic striper lure for its action, profile, rattle, and castability. It’s also very buoyant, and all of these qualities come together to form a plug perfect for switching to inline single hooks. The change won’t alter the action of many of these small spooks and floating surface poppers due to their buoyancy. I use size 1/0 and 2/0, but I’m not especially concerned with their exact size on these lures.

When it comes to small plugs, I’m not in the camp that believes single inline hooks lead to an improved hookup ratio, but that’s okay. These small, rattle-filled lures draw strikes from schoolies as they lead the spring migration. It’s enough for me to watch those young and hungry fish attack a lure with reckless abandon. A small handful do find the hooks, but they are handled and released gently.

I always crush the barbs, even on inline singles; in fact, I never fish topwater plugs of any kind with barbs. Not only is it better for the fish, but I believe it leads to improved hookup ratios whether I am fishing single hooks or trebles. A barb sticking up off the interior of a hook creates more resistance to penetration before the fish has made it to the hook’s gap, the point from which all its strength and security comes.

And, I mean, really crush the barbs down – it’s easy to just give them a quick squeeze with the pliers, but if you look closely, only the tip of the barb has been curled. You’ll hear a distinct crunch or click when you’ve completely crushed the barb.

I cannot tell you how many times I’ve handled barbed hooks only to get one caught in a sweatshirt sleeve or pair of waders. Although the hook point punches through the fabric with ease, the barb doesn’t make it through the majority of the time, meaning I can effortlessly back the hook out. I think this principle applies when a striper takes a swipe at a topwater plug – it can get the point into its mouth, but the barb prevents the hook from making it clean through for a secure hookset.

When you’re fishing topwater plugs, hook penetration can mean the difference between landing a dream fish or merely watching a whirlpool form and dissipate behind your lure. As a topwater angler, I must do everything in my power to convert as many of these swipes into hookups as possible.

The inside of a big striper’s mouth is shockingly firm, like rubber cement. When a big bass blows up on my topwater lure, I want that hook to be razor-sharp, catch in the fish’s mouth, and set clean through so I can fight it securely. I always keep a sharpening stone in my plug bag, and I always touch the hooks up before fishing. Plus, with the barbs completely crushed, the hook backs out of the fish’s mouth very easily while unhooking and doesn’t do any structural damage.

When I’m looking for big fish on topwater plugs, there are three types that live in my bag – Gibbs Pencil Poppers, Super Strike Little Neck poppers, and Docs.

I like to fish pencil poppers in rough surf when the wind is directly onshore, and at the Cape Cod Canal, of course. On the beach, I fish the 1-, 2-, and 2¾-ounce sizes depending on the conditions.

Around small bait and in calmer surf, the 1-ounce is first out of my bag. I fish the 2¾-ounce when I know there’s potential for big bait and big fish, but the 2-ounce is my go-to for most scenarios. I also always have white and green mackerel on me. At the canal, I’m partial to the Gibbs 3 1/8-ounce Canal Special in green mack.

Most pencils you pick up at the shop come standard with two trebles. For a long time, that has been the norm for striper plugs; however, as anglers focus on better catch-and-release practices for striped bass, they’ve been rigging their lures with this in mind. I’ve started cutting the points off my rear trebles on pencil poppers and filing them until they’re completely blunt.

The vast majority of the time, a bass gets securely hooked by the belly treble (which is barbless). The tail treble swings around wildly and can cause damage to the striper’s eyes and gills. However, pencil poppers are among the oldest style of striper lures, and they’ve been designed for decades for use with two trebles because the additional drag created by the rear treble is necessary for the lure to splash and walk properly.

The difference is subtle on larger pencils, but the fish seem to notice. One morning at the Cape Cod Canal, while fishing a pencil with just the belly hook (as opposed to the traditional 2 trebles), I was badly out-fished by anglers to my right and left also throwing pencils fully rigged with trebles. It was so noticeable that I returned to my vehicle, reattached the stock treble and clipped the points off. When I returned to my spot, I was immediately into fish. Clipping the points gave me the confidence that the plug was working properly while minimizing damage to the fish.

I do the same for the Doc. I’ve experimented with “canal-rigging” (split ring to barrel swivel to cut 4/0 VMC treble with the barbs crushed) from the belly-hook hanger with the rear hook removed, but I have missed too many fish on that setup. One of the shortcomings of the Doc is that it’s easy for fish to get leverage on it, resulting in bend-outs and broken split rings. While canal-rigging the Doc with a barbless treble works well, the fish have a harder time finding the hooks – all that rigging causes the hook to ride too far back on the plug. Since stripers have a habit of attacking big baitfish headfirst, it’s best to simply crush the barbs and cut the points of the rear hook. If you’re fishing in calm water without a lot of current, a scenario where the Doc excels, you can remove the rear hook altogether.

The last lure is the most modified, but it’s by far my favorite to fish. The Super Strike Little Neck Popper is a phenomenal plug right out of the box, but a few modifications really put it over the top. My canvas is the 2 3/8-ounce, black-eyed Little Neck Popper. White and Herring Blue are my go-to colors.

The first step is to remove the belly treble and replace it with a 4/0 VMC 8527 Fishfighter treble. The hook that comes standard on this plug is a 3/0 VMC, which is stout, but the 8527 is remarkably tough. The 4/0 also provides a bit more strength than the 3/0 and a larger gap to prevent ornery fish from shaking the hook. 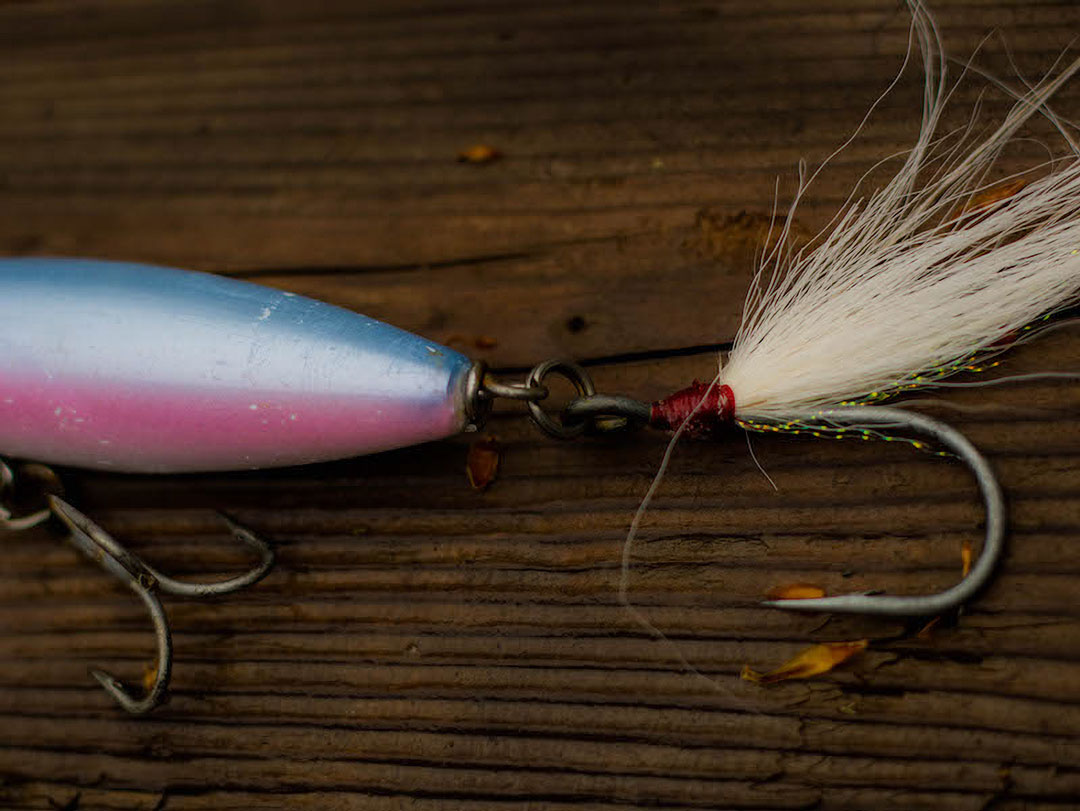 Next is the tail-hook hanger. Remove the tail treble, then grab the tail-hook hanger and twist it 90 degrees so its diameter is horizontal to the plug instead of vertical. (This won’t affect the structural integrity of the lure in any tangible way.) Set the plug aside and get your vise out. Next, use a 6/0 VMC 9170 Siwash for the tail hook. Secure it in the vise and tie as much white bucktail onto it as you can – the thicker, the better. Accent with strands of UV reflective tinsels, fritz, dubbing, or chenille. Don’t go overboard with it, but add just enough to complement the subtle hues of pink along the side of the plug.

Crush the barb and attach it to the split ring on the tail hanger with the hook point riding down. That’s right, down. I get a better hookup ratio with the hook riding downward on this particular plug. On all others, I prefer both single inline hooks to face outward, but for this lure, I like the single Siwash to ride facing down.

When it’s all said and done, you’ll have a plug with a massive profile and a killer action. On a slow retrieve, the Little Neck Popper swims on the surface much like a danny plug. The densely tied rear hook, combined with the extra mass of the 6/0 Siwash, accentuate that action. It almost swims like a jointed plug.

This plug lives on my rod when river herring are around. I swim it for a few turns of the handle, admiring the serpentine action on the surface. Every couple turns, I give the rod a gentle lift – just enough so that the plug spits just a bit of water forward. Then, seemingly out of nowhere, a whirlpool of water opens up behind my lure and the rod doubles over – a product of trial, error, modification, and experimentation.