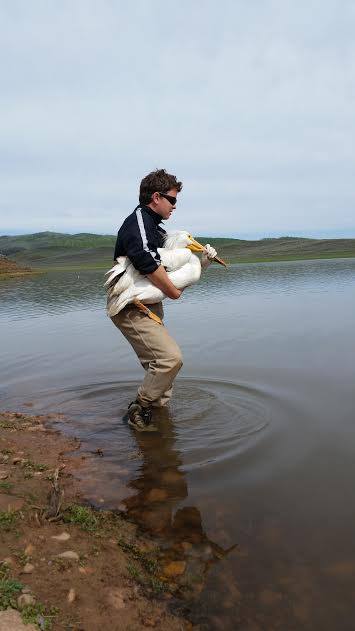 A researcher releases a Strawberry Lake pelican after a stomach-content examination. Utah.gov

It’s an age-old battle: pelican versus trout angler. Those gangly intruders are scooping up all the fish, right? Not so fast, says a team at Utah State University’s Quinney College of Natural Resources researching predator-prey relationships between pelicans and cutthroat trout. Turns out the winged pescatarians might be helping us catch more fish.

Strawberry Reservoir, a 27-square mile man-made lake southeast of Salt Lake City, is Utah’s most popular fishery. As part of the state’s Blue Ribbon Fisheries program, it logs 1.5 million hours of fishing a year, offering anglers ample opportunity to catch prize cutthroat and rainbow trout and kokanee salmon. Its lore goes back to a catch in 1930, when, according to the Utah Division of Wildlife Resources, Mrs. E. Smith caught the state record non-native cutthroat there weighing in at 26 pounds 12 ounces.

But migrating American white pelicans, which breed in Canada and the northwestern U.S. and winter in California, Mexico, and the Gulf Coast, also stop there to fish. And since cutthroat populations have fluctuated significantly in the reservoir in recent decades, lead author Phaedra Budy and her team decided to investigate whether the pelicans were to blame.

While cutthroats are well established in the reservoir and its system of feeder streams, the population of adult fish has ranged widely over the past two decades, from 220,000 to 464,000. So, Budy’s team captured pelicans over a two-year period and studied the contents of their stomachs. They found the birds’ diets consisted of 85 percent Utah sucker, 6 percent Utah chub, and 3 percent cutthroat trout. During spawning runs, when squadrons of pelicans form feeding “fences” that blockade the mouths of tributaries, the percentage of cutthroats consumed by the pelicans rose to 10 percent. But on aggregate, approximately 1 percent of the reservoir’s adult cutthroats were taken by the birds, the research found.

“Because pelicans are highly visible and congregate in large numbers at Strawberry Reservoir, anglers assume that they are eating tons of trout,” said Frank Howe, a member of Budy’s team. “But the study shows that pelicans are not interested in the same fish species that are prized by human anglers.” Instead, pelicans mostly eat the native suckers and chubs, species whose populations have been on the rise and a concern for wildlife managers. So, Budy and her study conclude, the pelicans are likely doing anglers a favor by removing competing native fish.