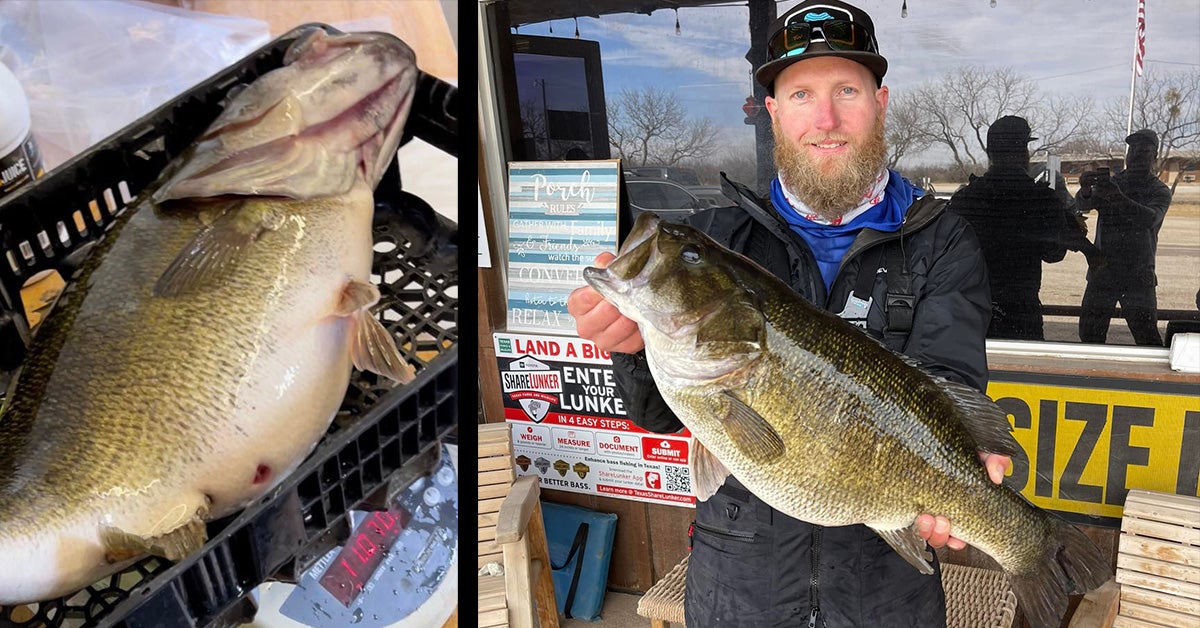 Brady Stanford hooked into a potential world-record bass while fishing O.H. Ivie Lake on February 22. Stanford was using a live sonar fish finder in about 18-feet of water by a bend in one of the lake’s channels when he saw a couple of big dots on the live-scope. He cast a swimbait in the vicinity of the fish and one of them quickly struck it. Stanford posted footage of the ensuing battle on his Facebook page. Check it out for yourself below.

Stanford quickly realized that the fish didn’t look like a largemouth but was too big to be a smallie. Instead, the fish was most likely a hybrid between the two species known as a “meanmouth” bass. The fish taped in at 24-3/4 inches long with a girth of 20.5 inches. It weighed 11.07-pounds and stands to smash the existing IGFA world record for the species, which is a 7.6-pounder that was caught in 2021—also at O.H. Ivie.

“Once I got the fish in the net I could tell it was a meanmouth, that was the holy s*** moment,” Stanford told Wide Open Spaces. “As soon as I caught it and put her in the livewell, I called my dad first to tell him. The next call I made was to [the] Texas Parks and Wildlife Department’s (TPWD) ShareLunker Program to find out what all needed to be done so I could collect a sample for genetic testing.”

TPDW officials from the ShareLunker Program met Stanford at the marina to observe the weigh-in and take official measurements of the fish. They also clipped a small piece of the fish’s pectoral fin to conduct help verify the fish’s species. The meanmouth is currently a pending lake, state, and world record.

It comes as no surprise that the record-class fish came out of Lake O.H. Ivie, which is hands-down the hottest place to catch trophy bass in the United States. Three world-record meanmouth bass were caught there in the last two years. Last March, Wyatt Frankens caught the 7.6-pound standing IGFA world record. This January, Brandon Burk broke that record with an 8-pound, 8-ouncer, though that fish didn’t qualify for an IGFA world record because it was caught on an Alabama rig with five lures, and the IGFA only allows three. Now, Stanford’s fish rounds out the trio. Lake O.H. Ivie has also produced a whopping number of trophy-class 10-plus-pound largemouth bass, and just last week, Field & Stream reported on a lake-record 17-pounder that was the largest bass caught in the Lone Star State since 1992.

After weighing in his pending record meanmouth, Stanford put the fish back into his livewell, zipped back out to where he caught it, and safely released the fish. He said the whole chain-of-events, from hooking the fish to releasing it, took place in less than two hours. He’s planning to get a replica of the fish made based on its photos and measurements.